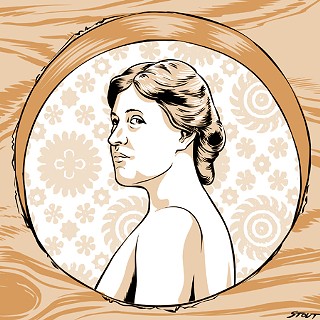 The short story "Coming, Aphrodite!" is set in Greenwich Village circa 1906, "almost the very last summer of the old horse stages on Fifth Avenue. The [Washington Square] fountain had but lately begun operations. ... Looking up the Avenue through the Arch, one could see the young poplars with their bright, sticky leaves ... and shining horses and carriages – occasionally an automobile, mis-shapen and sullen, like an ugly threat in a stream of things that were bright and beautiful and alive."

Even there she's getting away with a cutting little something. Ernest Hemingway's generation believed the First World War caused the great changes in American society, but Cather, born in 1873, 26 years before Hemingway, understood the automobile would alter every human activity. She hated cars. Refused to ride in one unless given no choice.

"Coming, Aphrodite!" concerns a young painter, Don Hedger, "chiefly occupied with getting rid of ideas he had once thought very fine," and a 20-year-old opera singer, Eden Bower – a name cleverly evocative of a certain tree in Genesis, the Tree of Knowledge of Good and Evil. Bower moves into Hedger's apartment building on Washington Square with her piano, her thrilling voice, and her beauty, all of which mightily disturb Hedger – as they would a woman of Cather's temperament, who preferred the companionship of women. (For me, Eden Bower is Nathaniel Hawthorne's Pearl, the new kind of woman whom, he predicted in The Scarlet Letter, would be born of the spirit of North America.)

Don Hedger discovers a knothole in "the high wainscoating" (whatever that is) and looks through it "without realizing what he's doing." What he sees is Eden in the raw, at her daily exercises, wearing not a stitch.

Cather didn't quite get away with that. When H.L. Mencken published the story in Smart Set, the most influential magazine of its day, Eden Bower wore a body stocking for her exercises. The 1999 Penguin edition, Coming, Aphrodite! and Other Stories, prints Cather's original version.

Which is why I chose this story to teach. Cather's books are among our greatest. My Ántonia, A Lost Lady, The Song of the Lark, O Pioneers!, Obscure Destinies, Death Comes for the Archbishop, and stories like "My Mortal Enemy" and "The Best Years" are, on the surface, so accessible they can be read to children, while in their depths they are as mysteriously complex as those geological anomalies of New Mexico that Cather wrote of so beautifully. But, as she says in The Song of the Lark, "If youth did not matter so much to itself, it would never have the heart to go on." The young are interested mostly in themselves and one another, so I felt this story of two daring young people would engage my students most. My hope was that one day, remembering "Coming, Aphrodite!," they'd pick up one of Cather's masterpieces and be educated all the more deeply.

A few pages after her exercises, Eden Bower, fully dressed, smokes a cigarette – a shocking behavior for a woman in 1919, much less 1906. She is 20, on her own, free as she pleases. Like Willa Cather, she is of the first generation of women for whom such freedom is possible. Cather was writing of one of her own while having the fun of describing a woman lovingly and lustily, even if she had to pretend to do so through the eyes of a man. (In many of her works, she got away with that.)

Don Hedger enjoys risks in his art, but when he and Eden Bower go to Coney Island and watch a woman in tights rise into the air in a balloon, Hedger hedges. "Wouldn't you like to go up with her?" asks Eden. "I? Of course not. I'm not fond of taking foolish risks." Eden sniffs, saying, "I shouldn't think sensible risks would be very much fun." She insists on meeting Molly, the balloonist, who has "something boyish and devil-may-care about her." Eden dons Molly's tights and goes up in her balloon. Hedger is shocked and enchanted. What Eden Bower embodies for him is "older than art."

"In time they quarreled, of course," Don and Eden, "and about an abstraction, – as young people often do, as mature people almost never do." Their fates are vaguely unsettling. Cather's portrayal of artists is usually unsettling. She knows the core of an artist's heart is often cold. It takes a certain ruthlessness to buck society's resistance and do this work. That necessary selfishness often seeps into other avenues of an artist's life, with predictably screwed-up consequences.

Four years ago, exploring Red Cloud, Neb., where Cather grew up, a knowledgeable resident told me, "They never taught Cather in our public schools here, ever." Not surprising. When she wrote of life on the plains, the gentleness of her prose and her love of the land belied her tough stance toward the limits of rural living. In My Ántonia she renames Red Cloud "Black Hawk." The Song of the Lark, a kind of spiritual autobiography, was, she later said, "The story ... of an artist's awakening and struggle, her floundering escape from a smug, domestic, self-satisfied provincial world of utter ignorance." With such exceptions as the person who spoke to me, Red Cloud has not been proud of the brilliant, brave girl who, at 13, cut her long hair short, dressed like a boy, and, for a time, called herself "William." Somehow she got away with that, too. In 1886, no less.

There is no "greatest American writer," but my hunch is that Cather will be read long after most of our novelists – even the most famous and praised – are judged antique. American novelists tend to write with a burning necessity to be relevant to their time. Cather wasn't so interested in that. In most of her work, Cather's focus is on what is older than art. What she cares for most are, as she says in My Ántonia, "those quiet moments that clutch the heart, and take more courage than the noisy, excited passages in life."

Beauty, wonder, contact, loss, closeness, distance, devotion, dignity, shame, the Earth itself, and how we care or fail to care for one another – these are Cather's themes, and they are timeless. When she tells of beauty, you are in that beauty. When she tells of loss, you hurt. No matter how specifically she describes her era, there is in Willa Cather the timelessness you feel when you're silent within and can hear the silence that is always present under and beyond whatever temporarily surrounds us.

What she said of Katherine Mansfield's work is more true of her own: "She communicates vastly more than she actually writes." The result is, to employ a phrase from Obscure Destinies, "some direct and untranslatable message."

She wrote poems, too. Not very well, usually, though several are memorable. Let's take leave of her with the line that sings in me deepest, from a poem about riding the train back to Nebraska: "Even in my sleep I know when I have crossed the river." 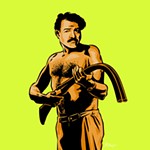 Letters at 3AM: So Big Deal, Hemingway
Will Huck Finn be a valuable and immortal American archetype in the future?