Alamo Village, where John Wayne shot The Alamo, has lost the 93-year-old matriarch who kept the movie set and Western-themed park open for nearly 50 years 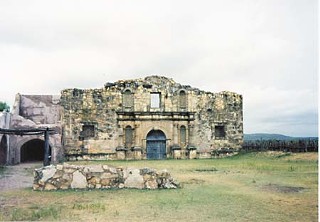 Alamo Village outside of Brackettville, where John Wayne shot the 1960 movie The Alamo, has lost the 93-year-old matriarch who kept the movie set and Western-themed park open for nearly 50 years.

With the news of the death in late June of Virginia Shahan, widow of James T. "Happy" Shahan, came word that the Western village has shut the gate on the daily Western shows, potentially forever. The 18,000-acre Shahan ranch and the 300-acre village built to look like San Antonio, circa 1836, are up for sale.

"Some lucky person could buy [the village] and continue a piece of Texas history," says Tulisha Shahan Ward­law, one of the ranch's founders' three children.

Happy Shahan turned a section of his ranch into the "movie capital of Texas" and became one of the founders of the modern movie industry in Texas when he lured Wayne and the biggest-budget film up to that time to the Texas border region. The make-believe frontier town has appeared in more than 200 movies, TV shows, commercials, and videos.

The area got its first taste of stardom in 1951, when Charlton Heston made a movie in the former cavalry fort in Brackettville. As mayor of the county seat of Kenny County, Happy lobbied hard to bring Jimmy Stewart, Ernest Borgnine, Dean Martin, Raquel Welch, Robert Duvall, and a long list of A-list projects to South Texas.

By the mid-1950s, John Wayne's dream of making a movie about the Battle of the Alamo was beginning to come true. He was scouting locations in Mexico and South America to create the set for Texas' most sacred shrine. According to Happy, who passed away in 1996, Texans threatened to boycott the movie if it wasn't filmed on Texas soil. Happy offered the use of his ranch to the Duke.

Wayne's production company built 19 Western-style buildings. The number has since grown to a village of 30 structures plus the battle-scarred replica of the former mission, which has starred in at least three other movies about the 1836 battle. During the 1960s and 1970s, movie lovers made the pilgrimage from around the world to the Western village to watch cowboy skits, browse the gift shops, and eat at the cantina.

"For a 50-year-old movie set, it's not in bad shape." says Wardlaw, who is battling cancer. The ranch will be divided among the three siblings or sold. "We've got some tough business decisions to make. It might open back up; it might not. I hope it does."

Until then, the ranch is still available for special events and tours by reservation, says Trevy Schroder, the village's business manager. As far as she knows, the trail rides will still happen if enough people sign up. For more information on the history of making movies at Alamo Village, go to www.thealamovillage.homestead.com/alamovillage.html or call 830/563-2580.