There are many tall pines

I remember the oak trees

That we used to climb"

A fan of the Byrds from the first time I heard them, I confess that when Sweetheart of the Rodeo came out in 1968, I didn't get it at first. Growing up in New Jersey meant all the many variants of country music were foreign to me.

The first week of my freshman year at college, a newfound friend and I were checking out the jukebox in a dorm snack bar and discovered the Byrds' version of Woody Guthrie's "Pretty Boy Floyd" from Sweetheart. My friend had found the album as difficult as I had, but on a lark we played the single. And then played it again. Then we went up to his room because he had brought Sweetheart with him to school even though he didn't like it. We listened to it over and over.

For me, it opened the door not only to country music but to taking chances listening to all kinds of music with which I was unfamiliar. It took well over a half-decade, but listening to that album endlessly eventually lead me to realize the importance of Gram Parsons. Soon after its release in 1973, I bought a copy of Grievous Angel. When I wore it out, I bought another copy. And later, yet another.

As one who has lived too much of my life deliberately being alone and in my head, there is a profusion of cultural landmarks that must be acknowledged. As crucial as Sweetheart was to me for many years, Grievous Angel became part of me, of my heart and breathing.

The story below is about an absolutely crucial, forever life-changing period of my life, although for a number of reasons, I go into none of the details. This may seem like cheating, but the real point that follows is defined by the overall enormity of those times, the details being part of a different though concurrent tale.

"Oh, and I remembered something you once told me

And I'll be damned if it did not come true"

During the summer of 1974, my friend Fred and I moved from outside Boston up to Bartonsville in southern Vermont to live at our friend Everett's house. Fred was in the middle of a novel, I was trying to write short stories, and Everett was working at a bakery. It was to be a summer of recovery, a much-needed time for renewal, which in so many ways was exactly how it played out. Time passes slowly when you're living in a rural community, which was what we wanted. Fred and I moved at an even slower pace, doing little more than reading, talking, swimming, and drinking, with occasional "work breaks" for writing, cooking, and baking.

Now, more often than not, tumultuous life-changing periods are only barely noticeable while they're happening, so they often occur when least expected. After an exhausting, way-too-action-packed year living in Jamaica Plain, Fred and I were thrilled with the quiet of living in Vermont. There was the house, attached barn, and a school bus fitted out as a camper (sleeping four) all to ourselves. Everett's mother was away for the summer running a crafts school.

Weeks passed into months, but there was an undercurrent of meaning during those times. Friendship became all-important, as did love. In thinking about back then, I remember reading Dashiell Hammett and listening to Gram Parsons as much as anything else. But it was not all quiet and peace.

More than anything else, in fact, that time was defined by croquet.

And a good saloon in every single town"

Bartonsville was so small that the only reason it was officially regarded as a town was that it had a U.S. post office. Once it had been headquartered in the house where Everett lived, as evidenced by a wall of unused mailboxes in the barn. It had then moved into a neighbor's garage, though it had now been closed for decades. There were no businesses in the community, simply a number of houses on either side of a single paved road that crossed the river by way of a covered wooden bridge.

It was a summer we listened to music whenever we had a chance, though it was vinyl records on a not-very-good stereo. In the months leading up to that summer, Grievous Angel was the album I played the most. All the days and nights of that summer we played it more than we played any other album.

"Well the first time I lose I drink whiskey

Third time I lose I drink anything

'Cause I think I'm gonna win"

One of the best things about summer in Vermont is that no matter how hard and heavy the sun pours down, it just never gets too hot. Even before Fred and I moved up there, Everett had begun to transform a very large overgrown field next to his house into a most irregular and bizarre croquet field. It was so oversized that it bore no relation to a regulation court. This mattered not at all, as I'm pretty sure none of us even realized that there were official croquet court dimensions as well as formal rules. It was certainly good that we were unaware and wouldn't have cared if we weren't, because size was only one of that field's many offenses against traditional croquet.

The wickets were homemade, cut out of large scrap pieces of plywood; they looked like bizarre tombstones with somewhat normal croquet tunnel holes cut in their centers, only with elaborate art nouveau-looking decorative tops. Anyone casually glancing at the field would never think of croquet any more than they'd expect to see followers of Anton Szandor LaVey dancing in lewd ecstasy as they summoned demons.

That summer friends came up from Boston and all over southern Vermont to drink way too much while competing in vicious croquet tournaments. Early on, Everett ratcheted up the intensity for the more serious players by painting his ball black with flaming red skulls. Playing not just to win but to kill, he whacked other players' balls off the field onto the road, where they rolled downhill. None ever got as far as the covered bridge, though some came close. None of it mattered to me as I never held it together very long, so I'd be out of the game early on, lying in the grass looking up at the sky.

Every couple of weeks, the croquet field became so overgrown with tall grass, towering weeds, and dense undergrowth that playing became damn near impossible until someone mowed the whole field. Somehow, I always found myself volunteered to be that someone. Late in the afternoon I would begin the job. Shirtless, I would spend a couple of hours pushing the gas-powered mower up and down the field.

As I did this I would sing at the top of my lungs, demonstrating not just a complete lack of musicality but never even by accident making a single pleasant sound. My nasal, off-key, uneven voice embarrassed me not at all, as I was convinced that I could not be heard over the roar of the motor.

Almost always, once I discovered an artist I loved – whether a writer, musician, filmmaker, actor, painter, whatever – I would begin to track down and devour all their work. With writers, I tried to find everything they had written so I could read it. With musicians, not only would I buy whatever records I could find, but if I was over at someone's house and discovered albums that I had not heard, I would cease all social interaction to listen to them.

There may well be others, but the only outstanding exception to that practice that I can think of is Gram Parsons. When I discovered that his first solo album, GP, had come out a year earlier, I never even thought of buying it. I was so wrapped up in Grievous Angel that there was no room for another Parsons album.

"In my hour of darkness

In my time of need

– "In My Hour of Darkness," Gram Parsons & Emmylou Harris

The terrible truth was that not only could my hideous singing be heard over the noise of the lawn mower by anyone in the house, but it actually carried in such a way as to be heard throughout the community. Even though it undoubtedly pained them more than it pained me, being the sadistic bunch they were, no one informed me of the cacophony I was inflicting on all. Half a dozen times I mowed that field; half a dozen times I sang my heart out. When all was finally revealed to me, it was done just as unkindly and with just as much malicious humor as you might suspect.

When they lay into me I was more than a little defensive, as my feelings were hurt and I was a bit upset about the whole thing. Now, three and a half decades later, I not only remember that whole summer fondly, I've come to cherish both my embarrassment at being mocked and the whole picture and sound of it all. There I was, shirtless in the late afternoon of a Vermont summer day, pushing the mower and singing Gram Parsons' songs as loudly as I could in a voice worse than anyone could imagine as my friends hid their smiles while drinking every bit of alcohol in sight. 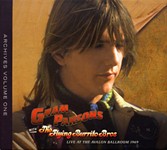 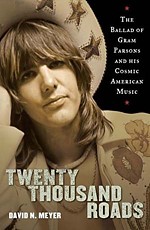 Gram Parsons, Grievous Angel, The Byrds, Sweetheart of the Rodeo