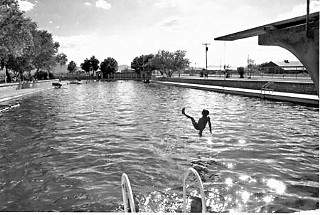 Swimming holes in state parks are some of the most reliable public places to get wet. With a summer as hot and dry as we have had this year, finding a place to swim and a shady tree to lie under is one of the best kinds of outdoor fun.

I asked a friend at the Texas Parks & Wildlife Department which were the best state park swimming holes. He requested anonymity because it would be unfair to show favoritism on something so subjective.

His list, in no particular order, of the top five state park swimming holes shows his years of service to the parks. I added three of my favorites.

Balmorhea State Park in West Texas was first on his list and should be close to the top of anybody's list of swimming holes. Covering almost two acres, the spring-fed pool stays 72 to 76 degrees year-round. Staying in the park's cabins is also a real treat.

Lost Maples State Natural Area outside of Vanderpool was a surprise to me. Known mostly for the colorful fall foliage, there is a nice swimming hole in the Sabinal River by the campground.

Pedernales Falls State Park near Johnson City is worthy of inclusion on this list. The river is pretty slow-moving, but there are still a few pools where you can get wet. In wetter years, this is one of the best swimming holes in the state.

South Llano River State Park, just south of Junction, is on another river with levels that can fluctuate wildly. There is a spring upstream from the park that keeps the river running during dry seasons. This park is one of the best-kept secrets in the state parks system.

Inks Lake State Park outside of Burnet has the terrific Devil's Waterhole in the northern end of the park. The constant-level lake offers beaches where the pink granite slabs slip into the water. Add to this entry any of the other 14 state parks with "lake" in the name; they all have swimming beaches.

Galveston Island State Park is one that I would add to the list. The park has reopened since Hurricane Ike nearly washed it away.

Palmetto State Park outside of Gonzales needs to be on the list as well. The San Marcos River takes a horseshoe-shaped bend in the park for a good tube ride.

And finally, Garner State Park on the Frio River is one of the most popular swimming holes in South Texas. You can do a float trip or just soak in the cold water. Avoid visiting on weekends, if you can.

At least my trusted source at TPWD didn't suggest I take a flying leap into the water at Brazos Bend State Park. South of Houston, the park is best known for telescopes and alligators. I guess he really is a friend.