Why do we play? The question is harder to answer than you might think. Inevitably, we get mired in tautologies. We play because it's enjoyable, one might say. And why is it enjoyable? Because it's fun! But what exactly is the nature of this "fun"? Is running a marathon fun? How about climbing Mount Everest?

And while we're at it, another question: What, ultimately, is the point of these enormous expenditures of energy and effort, of time and money?

In the last few weeks, as we celebrate the 40th anniversary of the Apollo 11 moon landing and wonder what it had all been about, a lot of people have found themselves asking these questions.

In the 1960s, all kinds of reasons were given for putting a man on the moon, mostly having to do with the Cold War and our quest for technological preeminence. If the Soviets got there first, just as they had been the first to put a satellite, an animal, and a man into orbit, who knew what existential dangers our nation might face in the years to come?

Turns out, though, this Apollo mission accomplished almost nothing, practically speaking. Bounding around the lunar surface, collecting some rocks, hitting golf balls, and planting an American flag "had been a battle for morale at home and image abroad," Tom Wolfe recently wrote in The New York Times. However, "it had no tactical military meaning whatsoever. And it had cost a fortune, $150 billion or so. And this business of sending a man to Mars and whatnot? Just more of the same, when you got right down to it."

Yet it was totally worth it. Putting a man on the moon – two men, actually, Neil Armstrong and Buzz Aldrin, with 10 more to follow in the next 2½ years – was, in my opinion, the greatest single achievement in the history of the human race. (Yes, greater even than pop-up toasters and bell-bottom jeans.)

I say that even if, in retrospect, it's clear that we were just playing.

Actually, strike that word "just." There is nothing marginal or negligible about play – unless, that is, you think Shakespeare and Mozart are negligible. That all play is pointless, changing nothing, is undeniable. But that doesn't mean play doesn't matter, that it isn't worthwhile. In fact, the very impracticality and irrationality of play, whether it's running races or dancing a ballet, are what prove we are more than rational beings. Against all logic, we yearn for transcendence.

What has always been lacking in the NASA program, Wolfe says, is not more scientific or technological prowess, but rather a better philosophical understanding of why the tremendous effort is worth ­making.

This may not be the philosophical argument that Wolfe is looking for, but I say the reason we need to explore the heavens is the same reason we need to sing arias and write poetry and hit baseballs – no, not because doing so is fun or enjoyable but because it is in these moments of pointless play that, individually and collectively, we transcend our lesser selves. 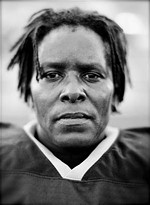 Playing Through
Is football a sport only for men? The women who play for the Austin Outlaws think not.