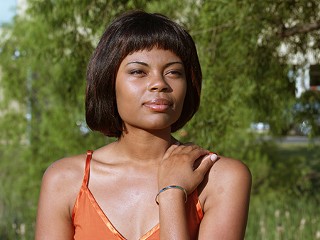 The magnificent Zion won Best Model (Photo by Seabrook Jones/www.juicythis.com)
THE AUSTIN FASHION ARMY MARCHES ON As I've said before, we have plenty of fashion shows to go around, but they are usually centered around one, two, or three separate boutiques, with all the boutiques showing what they bought at market in New York, L.A., or Las Vegas. Granted, there's nothing that specifically defines what a fashion show can or cannot be, so we have a plethora of presentations – some good, some not so good. Tribeza, under its old ownership, for example, took the fashion show into a totally different realm by having Style Week. And now, this last week, an array of sponsors presented Austin Fashion Week. OK, I've lived and worked in the fashion business in New York and can promise you that the real Fashion Week bears little relation to Tribeza's or any other Austin event. At Fashion Week in NYC, you do not get shuttled from store to store in order to purchase things – that's called a shopping spree. Whether the new Tribeza will continue these events remains to be seen (but it did put on a hell of a fashion show). Now, Matt Swinney, former editor of Rare magazine, just debuted his fashion week. It was indeed loaded with fashion events and treats, but do I think it was a successful "Fashion Week"? Maybe; maybe not. Again, it depends on how you define it. In the fashion capitals of the world, Fashion Week is when the press and buyers from all over the planet gather to see dozens of shows of clothes that the designers hope will catapult them into the best stores. In Austin, Fashion Week does not resemble that. Here, it is a cavalcade of beginning seamstresses, a few seasoned sewers and designers, and wares from a whole lot of local boutiques. To be fair, Matt Swinney's Fashion Week was a bit more than that. Jaclyn "Jackie-O" Havlak and Patricia Paredes were with me at the inaugural Austin Fashion Awards last Sunday (I usually need at least one attendant, but this time I had two beauties on my arms), emceed by the coolly elegant Jennifer Hart. There were lots of laughs when she talked about the Austin style scene and said (I'm paraphrasing), "When Stephen Moser gets arrested for wearing a white fur coat and black leather pants while torching his boyfriend's car, how could anybody say we don't have style?" Cute, Jennifer. Even I laughed. My attendees Jackie and Patricia are no slouches in the fashionista department, but between the three of us, we hardly recognized any of the names being read as award nominees. Confusion was compounded by the fact that there were no images presented to show us who the person is, what their designs look like, etc. The additional impression that many of the winners were Rare advertisers brings about a question of credibility (although the show is technically not produced by Rare). There were some staggering omissions in certain categories, but, as I've said before, a fashion show does not have to be all things to all people. Lisa Brooks, winner of Best Hairdresser, gave me a dazzling wave as she ascended to the stage and, among the other things, said something like: "... and to Stephen Moser for giving me such great coverage when I started. Hope you won't diss me now," with golden cowboy-boot trophy held high in the air. And the winner of Best Designer (I think) gave an incredibly gracious shout-out to Todd Wolfson, who should have been there and should have been a winner. So was it a Fashion Week? Maybe, maybe not, but it sure was fun. 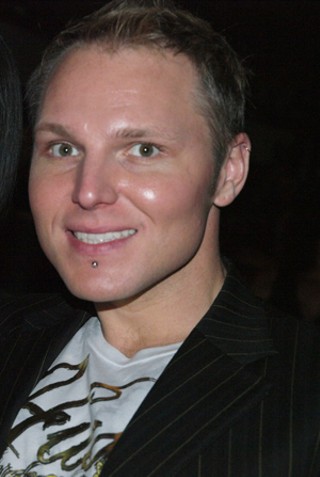