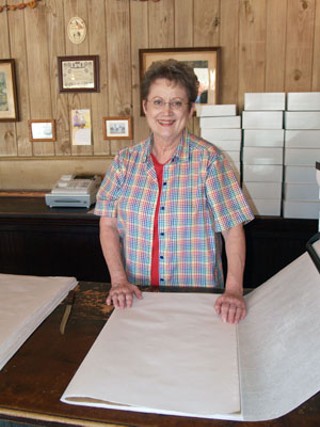 Dietz Bakery in Fredericksburg continues a family tradition that is three generations old. Five mornings a week, Don Dietz bakes up batches of breads, doughnuts, and pastries the way his father and grandfather did. Around noon, when the fresh-baked goods are gone, his wife, Marcia, locks the front door.

"People always ask me what my favorite is," Marcia Dietz says. "I tell them that it changes all the time." She has lots of tasty treats to choose from. You wouldn't know it from looking at her, but after 35 years of running the bakery, Marcia still enjoys sampling the wares.

The shop is probably best known for its breads. On any given day, it will have three of the five kinds of loaves the Dietz's make – white, rye, pumpernickel, French, and whole wheat. White is the most popular. It is so good it could almost be classified as a cake.

Springtime in the Texas Hill Country means graduation parties, weddings, and other fancy affairs. "A reception around here means barbecue, homemade bread, and beer," Marcia says with a laugh. "We're just happy we can supply one of the three."

Most of the bakery's business comes from shoppers looking for breakfast, though. On weekend mornings, the line of customers often winds out the front screen door. The most popular breakfast items are the cinnamon rolls, which come in plain, raisin, or pecan. The raisin-cinnamon rolls were a favorite of Lady Bird Johnson, Marcia says.

Don also makes three kinds of Danish pastries as well as fruit rolls, sausage wraps, fruit turnovers, cinnamon twists, and raisin nut logs, which are like a coffee cake and are popular with the local bed & breakfasts.

Friday mornings are the busiest, with Saturdays being a close second. Don gets up most mornings between midnight and 4am to start the day's baking, depending on the orders that are due that day. "We do things the old way. It's not very efficient," Marcia says, but it makes a quality product. By a quarter of seven, everything is ready for when the two ladies that help Marcia at the front counter arrive, and the doors open at 8am.

"[The life of a baker] is a very different kind of life," Marcia says. A year after they were married, Don left his job at IBM in Dallas and bought the business from his father that his grandfather started in 1928. "I thought it would be sweet and charming to own a small-town bakery," Marcia says. "I have to admit, it has been very interesting."

Dietz Bakery is at 218 E. Main in Fredericksburg. The ovens are fired up Tuesday through Saturday. The doors open at 8am and don't close until everything is sold out. To place a special order or to find out what's available, call Marcia at 830/997-3250.