Stephen F. Austin is honored with a statue south of Angleton 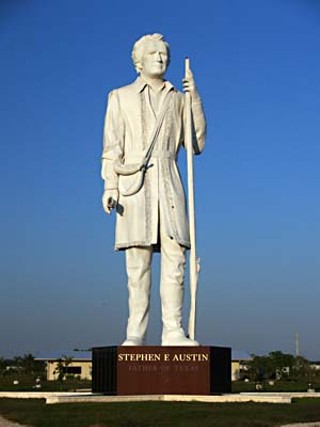 Stephen F. Austin still watches over the coastal plains. South of Angleton, near where an approximately 60-foot-tall statue of the Father of Texas stands, Austin landed with his first colonists and selected his homesite.

When the first Anglo-American settlers arrived in Texas, the mouth of the Brazos River was an important natural harbor. More than 25,000 immigrants flooded ashore at the tiny port of Old Velasco. The first Capitol of the Republic of Texas was established a few miles upriver at Columbia.

"We built [the statue] as a reminder to all the people moving into the area that a lot of history happened here," says Sehon Warneke, former president of Stephen F. Austin 500, the volunteer group that organized construction of the Austin statue. "This was once a pretty wild and rugged place. The pioneers had to endure mosquitoes, rattlesnakes, and storms just to survive."

Soon after artist David Adickes unveiled his 67-foot statute of Sam Houston near Huntsville, a group of Brazoria County businessmen decided that it was time to honor Austin, too. A native Texan and former art professor at the University of Texas, Adickes agreed to do the statue at the same time he was working on his series of gigantic presidential busts for his Presidents Park.

Rancher Henry Munson donated the 10-acre Henry William Munson Park near the intersection of highways 288 and 35 at the geographic center of Brazoria County. While Adickes worked, the volunteer group began preparing the site. The hole dug to raise the elevation of the ground for the statue became a Texas-shaped pond. Nature trails were built, and a small museum and office building were added to the park. The group planted 300 trees to honor the first 300 families that Austin brought to Texas.

The museum houses a collection of artifacts that tell the story of the coastal settlements. "Once we started looking, we found lots of old Texas relics in garages and attics," Warneke says.

By 2003, Adickes was ready to start assembling the concrete and steel statue. On a 12-foot, five-sided granite base, the artist assembled the 15 sections that took almost a year to piece together.

As you drive south on Highway 288, the white statue of Stephen F. Austin in buckskins and holding a 52-foot rifle appears like a ghost from among the trees of the forest that borders the highway. The park is open to the public 24 hours a day. The museum opens when volunteers are available to unlock the doors. There's usually someone there from 10am to 6pm on weekdays and in the afternoons on weekends, Warneke says. To make an appointment at the museum, call 979/239-8718.

When you're in the Angleton/Lake Jackson area, take time to try one of the many fine Mexican restaurants. "I don't know why it is, but we've got great Mexican food," Warneke says. "And I've tried every place in the area."