T.J. Mabrey is dedicated to bringing an appreciation of art to Lampasas 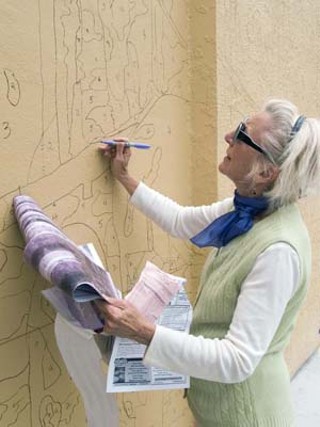 T.J. Mabrey has a vision for her adopted hometown. As chairperson of the Vision Downtown Lampasas art committee, she has worked long hours to bring art appreciation to the area, but her commitment to the community runs much deeper.

"You create the community you want to live in," Mabrey says. She and a crew of volunteers are currently working on a mural on the side of the hardware store at Western Avenue and Second Street. When it's done, the 17-by-100-foot painting will illustrate the history of Lampasas.

This is the group's second mural in two years. The first, at Western Avenue and Fourth Street, was a mural of cowboy footwear that honors the tradition of boot makers in the ranching community. Two more wall-size paintings are in the works for the historic downtown.

To transfer the image to the wall, first Mabrey drew a grid on the surface. At night, she projected the image on the wall and made an outline. The next day, volunteers filled in the paint-by-numbers picture.

Since moving to the "boonies," as she calls her home outside of town, Mabrey has had no shortage of art projects. She was one of three artists to contribute to the first phase of the Hanna Springs Sculpture Garden in Lampasas' Campbell Park in 2005. The garden now has a dozen large sculptures. There are plans to add a bird-watching area to the park that also includes a playground and swimming pool.

Born in Eagle Lake, Texas, Mabrey grew up the child of a proud Texas A&M Aggie. She married a career officer in the state department and saw the world. "But Central Texas was always in my heart and life," she says. The couple moved to Lampasas County to help care for her aging parents. "I'm not a Lampasasian yet. I've only been here 14 years."

"I've never thought of myself as an artist," Mabrey says. "I'm a human being living an artistic life." As a sculptor, her work exhibits a smooth balance of shape and texture. "Art is such a strange thing," she says. "Everyone has their own interpretation, but they either feel the vibration or they don't."

This fall, Mabrey will have a one-person show at the Croft Art Gallery in Waco. "I really like [the Crofts'] involvement in their community," she says. "They're a young family that is making an investment in art in Waco."

Mabrey thinks Lampasas is a wonderful town with lots of potential, and she's constantly trying to bring out the best of it. She recommends the Yumm Factory Cafe on the southern edge of town and Hancock Springs swimming pool. "It's one of the few free-flowing swimming pools in Texas," she says. "It is just an incredible experience. In the summer, it's as cold as a witch's brew."