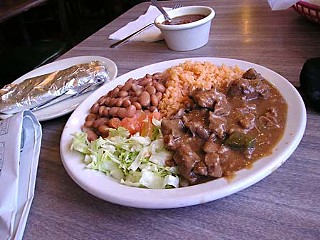 Leal's Mexican Restaurants in the Panhandle named several of their combination plates after the customers who made the dishes popular.

For instance, Joe Rhodes was a famous boot maker in Muleshoe during the 1970s. For nearly 30 years, Rhodes would cross the highway to have lunch at Leal's. He always asked for the same thing: a bean burrito covered in stewed meat, topped with a layer of cheese. The combination became the "Joe Rhodes Special."

"[Rhodes] came every day and ordered the same thing," says Victor Leal, the restaurant's second-generation owner. "It was easier for the waitress to just write 'Joe Special.'"

The Leal family business traces its roots back to 1957, when Jesse and Irma Leal opened a tortilla factory in Muleshoe. The branches of the family tree have spread out to six restaurants, a line of salsas, and a mail-order business.

Jesse moved to the Panhandle from Mercedes so he could work as a time keeper for a produce company. At the time, the High Plains were flush with irrigated crops, and the people needed to work the harvests. Much of the economy rested on the shoulders of Mexican migrant workers. The Leal's fresh tortillas sold like hotcakes.

"Growing up here was tons of fun," Victor, a former mayor of Muleshoe, says. "We had two movie theatres and played baseball until it was dark."

By 1968, the tortilla factory they started in their home grew into Leal's Restaurant. Over the years, the little cafe on the Lubbock Highway became a tradition among the locals and travelers. "On Sundays at noon, you can set your watch by when the churches let out," Victor says. "There'll be a 45-minute wait for a table five minutes later."

Although Irma still comes by the restaurant regularly, the couple officially retired in 2004. The parts of the company were sold to the children. Victor took the Muleshoe location and opened another restaurant in Amarillo. Sister Laura operates two locations in Clovis, N.M. Sergio runs the tortilla and chip factory. Alma and her husband have a Leal's in Henrietta. Hector operated a restaurant in Lubbock, which is now closed, and his daughter runs the Plainview location. The family was disappointed when little brother Abel became a lawyer, but he has since come back into the fold with a line of Leal's salsas.

"We were all raised in the kitchen," Victor says with a laugh. Even though the siblings are free to run their businesses as they please, "We're all connected by name and reputation," he says.

How does one go about getting a Mexican dish named after him or her? Don Bryant's route to immortality was to show the cook how to fix a special burrito. Then the local resident ate it every day for year. It's now one of the most popular items on the menu.