Stephen saunters, sashays, and gets sassy at SXSW

Reinstated: Though peeved at Lady Sovereign’s no-show, Perez Hilton was more than plucked when Kanye West made a surprise appearance. (Photo by Seabrook Jones) 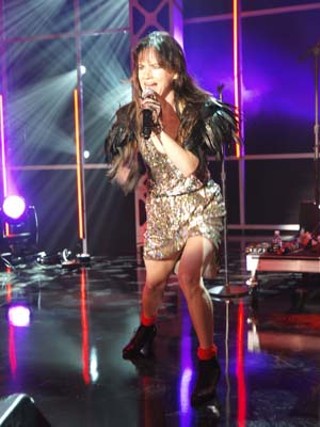 Reinvented: Juliette Lewis and her band the New Romantiques performed at the Direct TV live set at the Convention Center. (Photo by Seabrook Jones) 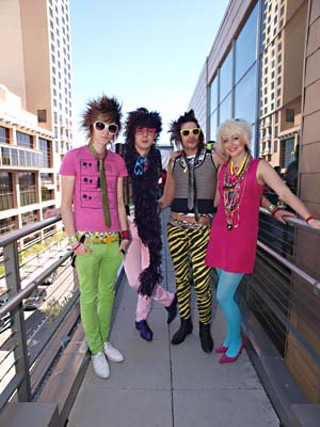 Relieving: Angry vs. The Bear showed up at the Austin convention center looking and sounding like the tasty electro-pop confection that they are. (Photo by Seabrook Jones)

SXSOMETHING It's all a blur of activity after a while, and everything runs together like the colors of a pastel sidewalk drawing in the rain. I went to some parties; skipped others; saw Film, Music, and Interactive delights; hung out; and ran around. The Texas Film Hall of Fame was the best one yet, and we covered that in last week's column. My friend Mark Mueller's movie, The 2 Bobs, was roundly acclaimed as a hit comedy (Mark is developing quite an eye as a producer), and virtually the entire cast was in attendance, including star-to-be Devin Ratray, who also worked the Music Conference and the 27th annual Austin Music Awards. Just don't say he's the next Chris Farley or John Candy – he's his own man in every sense. My favorite party may have been AustinVentures' unofficial afterparty for the SXSW Web Awards. Packed to the gills, new club Malverde (featuring fabulous interiors by Joel Mozersky) was ultrastylish and chic, just as we expected. Speaking of the Music Awards, my posse and I prepped by hanging at the fabulous Royal Blue Grocery (www.royalbluegrocery.com) at the 360 for flowers, snacks, and a divine bottle of Louis Roederer Champagne. Great prices on the bubbly and the added treat of being able to sip it at Royal Blue's outside dining tables. Talk about service – owner George Scariano Jr. waited on us personally, and by the time we left for the Music Hall, we almost didn't want to leave at all. But we did, and surprises from the Music Awards included Exene Cervenka showing up to present an award with David Yow inducting the Dicks into the Hall of Fame and staying to present Best Punk Band to Kimberly Freeman of One-Eyed Doll. All I can say is that Ms. Freeman must be shitting pretty pink bunnies for that accolade... That was indeed Dotty Farrell singing backup for the Dicks... Felicity Fromholz of Urban Decay Cosmetics brought a team in who did amazing make-up on the nonstage staff... Nakia Reynosa was the surprise in the set of Southern Sirens, also featuring Suzanna Choffel, Carolyn Wonderland, and Ruthie Foster... Nice to see Jon Dee Graham appear to receive (along with the fabulous Alejandro Escovedo) the Hall of Fame award for the True Believers. Considering his health and recent bad luck, he's a real trouper for being there... Film land glitterati was everywhere: sometimes not on the screen or streets or during the Film portion of South by Southwest but in other unexpected places. Juliette Lewis, for instance, in her rock star incarnation showed off her new band Juliette & the New Romantiques, dressed to the nines in fabulous couture and rocking her way through her sets at the Convention Center and Emo's, followed by set after set of surprise appearances around town. Everybody gets to reinvent themselves now and then, don't they? Musically, Devo packed 'em in at the Music Hall and packed the same kind of wallop they did a thousand years ago, with fans screaming in reply, "We are Devo!" when the band played their art-punk classic hit "Jocko Homo." At an interview, it was obvious that the band had attracted a large following from citizens of Akron, Ohio, all of whom, it seems, came to SXSW. Joining the group for another spate of live shows is former Nine Inch Nails, Sting, and Guns n' Roses drummer Josh Freese. The Cutest Unsigned Band Award goes to Angry vs. the Bear, whose appealing looks and irresistible sound drew crowds during a series of showcases, including a packed house that overflowed onto Sixth Street stopping traffic outside of B.D. Riley's. The coup de grace was Perez Hilton at his Dell-sponsored party, who presented bangin' sets by Little Boots, Solange Knowles, Natalie Portman's Shaved Head, Ladyhawke, and Kayne West. Lady Sovereign was rumored to have showed up briefly at the party but with such a sore throat that she refused to go on – not rumored is the expletive that Perez called her – in front of a stunned audience – for not going on. So there. Even if you weren't at SXSW, you can pretend you were. 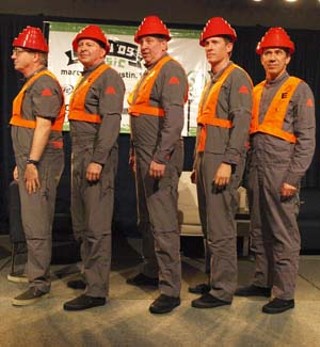 Returning: With their iconic “energy domes” intact, Devo, pictured here at their SXSW interview, answered questions from the audience. (Photo by Seabrook Jones) 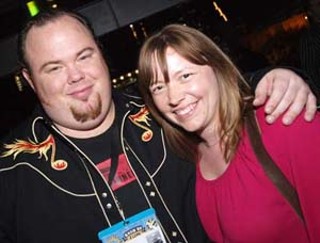 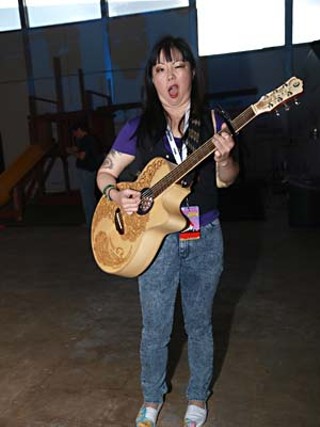 Retrained: Comedienne (and now acoustic guitarist) Margaret Cho made ‘em scream at the legendary Velveeta Room. (Photo by Seabrook Jones)
By now, the news is old: Stephen Moser was arrested Tuesday and charged with arson. While he would love to be able to report that he has been whisked away on a jet to Bolivia, in truth, he is sequestered locally with friends. He does, however, wish to thank everyone who stepped up to offer moral support. Stephen's column will continue until further notice. – Kate X Messer