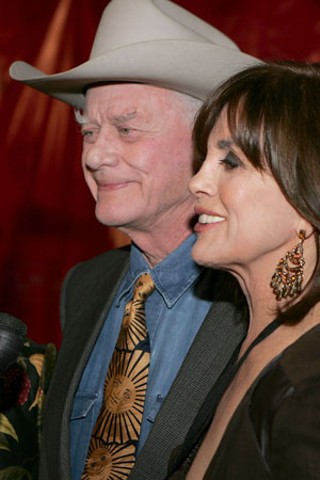 LOVING It's the highlight of my year. Every year. The Texas Film Hall of Fame is the coolest place on earth to be. Well, that and the underwriters party the night before. The glorious Jennifer Bosch of the swank Inn at Dos Brisas (www.dosbrisas.com) flew in from Houston to be my escort to both events, and I went to meet her at the Four Seasons, which was buzzing with that undeniable vibration that happens around South by Southwest. Limos, movie stars, and stylish parties are the order of the day, and we were certainly no slouches in that department. After a grueling wardrobe consultation with Jennifer, we selected exactly the right outfit for her: tall boots, jeans, a crisp white blouse, a tan cowboy hat, and a golden sable jacket to keep out the chill of the last gasp of winter. We looked divine, of course, and met friends Mark Mueller, Heath Riddles, Stephen Rice, and Mark Erwin, all of whom attended the underwriters party at Julie and John Thornton's house with us. House is such an inadequate word to describe their dwelling. Even palatial seems too demure, but I digress. Regardless, it was certainly large enough to accommodate the personalities of so many movie stars strolling across the lawns like peacocks. Or better yet, the stars were more like the prizes in a grand Easter egg hunt; you'd turn a corner, and there was Billy Bob Thornton; glance across the terrace, and there was Dennis Quaid; by the outdoor fireplace was Powers Boothe; on the path out back were Brendan Fraser and Catherine Hardwicke ... and then I spied J.R. and Sue Ellen Ewing. I mean, it's the kind of house that I imagine meeting J.R. and Sue Ellen in, but this was not the imagination, it was Larry Hagman and Linda Gray in the flesh. The whole night was dreamy, a feeling that carried over to the next evening at the awards show. Jennifer and I strutted down the lengthy red carpet at the Austin Studios amid the glaring flash of the paparazzi, and within moments, we were among the same cast of characters, albeit in a more high-voltage atmosphere. After dinner, we hung backstage and chatted with the stars, especially Linda and Larry. I'd been riveted by Dallas for a few years when it began 30 years ago, so I was thrilled when I asked Larry and Linda if they'd please sign my 8-by-10 of the two of them. With a flourish and covering most of the photo, Linda signed first. "To Stephen, Thank you so much for the fabulous clips. Love, Linda." Then Larry looked at the photo and the small amount of room left for him to sign and said, "Damn, the woman never did leave me much room." I would say that Linda Gray may have been the warmest and most gracious of all the female stars I've met through TFHF – and there have been plenty of them, notably Farrah Fawcett and Marcia Gay Harden. In fact, all the stars were on their best behavior, dammit, so there was little gossip to be culled ... but lots of star power to bask in, and that we did.

LOAFING I think that Kirk Gallery (210 Guadalupe, www.kirkgallery.com) has the finest in vintage midcentury modern furniture in Austin – not the chain-store reproductions but the real things, such as an iconic, original Arne Jacobsen Egg chair ($6,800) and an Adrian Pearsall lounge chair ($3,600). Proprietor Jeff Kirk has an impeccable eye for the past and mixes with just the right amount of contemporary gifts and home accessories to make the gallery very accessible to everyone... Beyond Tradition (221 W. Second, www.beyondtraditionaustin.com) is a literal treasure trove of gorgeous jewelry, many pieces designed here in Texas. Proprietress Kappie Bliss specializes in statement jewelry of gold, silver, and semiprecious gemstones, carrying the likes of designer Vicki La Plant of Denison, Texas, among others.

LAUNCHING Last Saturday's launch party for StandardAnswer.com at the Red Eyed Fly was just an inkling of what this entire week will be like. With a capacity of 300, there was a line of 700 waiting outside at one point. The new social-networking site seems to be a hit and garnered many new fans with the party, which presented a couple of knockout bands: White Denim was one, but it was Black Joe Lewis & the Honeybears who were dazzling. Like a cross between the grittiness of James Brown and the suave good looks of Pharrell, Joe is going to be huge. I mean it. Huge. So talented, you should go to his MySpace page (www.myspace.com/blackjoelewis) and see the rest of the South by Southwest dates he's booked. See him now before the publicity gets to him.