Bachelorette parties in gay bars: Sure. Why wouldn't we want to celebrate your wedding? 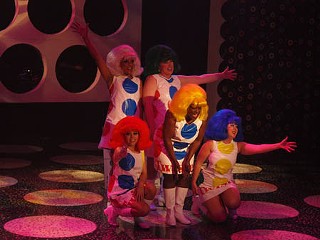 Members of the cast of Zach Theatre's Beehive bid you a 'do. (Photo by Seabrook Jones/www.juicythis.com)

DEBATE Months ago, I wrote about the appalling trend of bachelorette parties – replete with bridal veils and "I'm the Bride" T-shirts – overtaking gay dance clubs. The girls who do this say it's so much more fun at our few gay bars, rather than at the hundreds of straight bars (or "ladies-only" clubs) available to them. I was recently asked to help host one of those bachelorette parties ... and declined politely, explaining that I was among those that felt that the celebration of heterosexual marriage in a venue whose regular customers are denied the right to marriage was hypocritical. It's not a new story. The bar owners don't really care as long as their cash registers keep ringing up sales, but many customers feel displaced ... not especially by the women themselves but by the heterosexual male friends that accompany the throngs of soon-to-be newlyweds. It's a conundrum. A sizable amount of gays feel that a gay bar should be exactly that: a gay bar. I count myself among those who feel that way. But it's a very dicey subject to bring up. Gays fight against discrimination, but isn't closing the doors of gay bars to certain individuals a form of discrimination itself? I'm confused. 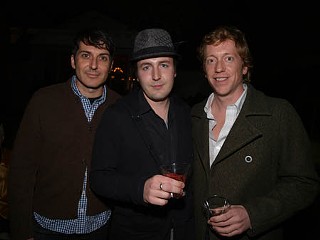 NOTES Last weekend's sold-out Merry Merry Martini Mixer for Equality Texas (www.equalitytexas.org) was just about as merry as it gets, Mary. Mercury Hall, one of my favorite venues, was awash in Ketel One Vodka and the glamorous souls who give even more than money to Equality Texas, guaranteeing that the good fight will continue... I will not be making an appearance at AIDS Services of Austin's upcoming Viva Las Vegas benefit on Feb. 21 as promised. Or at least as I promised ASA. So the fashion-themed event will have to do without me ... at least in person. But that doesn't mean you can't go. Get your tickets at www.asaustin.org. ASA is in high gear with the upcoming Viva event, as well as the annual Hill Country Ride for AIDS coming up in late April.

THE BIG 'DO Through Feb. 22, you'll have your chance to say a fond farewell to Zach Theatre's longest running show, Beehive. A tribute to the hairstyle and the glamorous, dangerous girls that wore them, directed, of course, by the brilliant Dave Steakley and starring some of Austin's biggest and brightest stage talents. Go to www.zachtheatre.org for more info.

SUNDAY! Sunday, Feb. 8, 6pm at Antone's: Do not miss With Love to Moms, a benefit for the mother of our friend Pam Blanton (www.blantonpr.com). Pam's mother, Elizabeth Parr, is fighting mouth cancer and neither insurance nor Medicare will cover the cost of the treatment necessary. Pam, whose agency has represented some of Austin's most prestigious businesses, has been selfless in putting together benefits for others and for getting generous donations from her clients. Now, she needs our help. With Love to Moms features Dale Watson & His Lone Stars, Alpha Rev's Casey McPherson, Lucky Tubb & the Modern Day Troubadours, Penny Jo Pullus, and a surprise appearance by one of Austin's most beloved performers. Tickets are $15 (at www.antones.net, through Front Gate Tickets at 389-0315, or at the door). The show begins at 7pm.