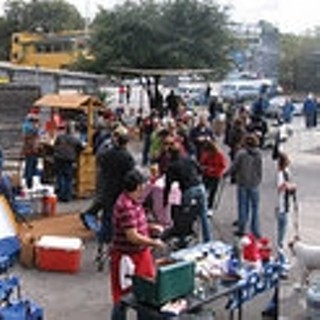 Kind of hard to wipe that shit-eatin' grin off your face, isn't it? We're only a couple of days into the new administration, and you're still expecting cash and Ecstasy to start falling out of the sky … followed maybe by Osama bin Laden's corpse … but let's not get ahead of ourselves, eh? With so many problems looming, it's nice to take a break and remind ourselves that things could be a whole lot worse. Sure, we're on the brink of financial ruin, our infrastructure is increasingly decrepit, and most of the Third World hates our guts (maybe because our guts are so much larger than theirs?), but when it comes to riding out great depressions, even Kansas is preferable to places like Somalia or Sudan, if only by a small margin. Plus, unlike Somalis, Kansans actually speak our language … often better than we do and without an annoying accent. Yes, it's good to be an American. It's good to be able to whine about the high price of gas. It's good to be pissed off that some evil, greedy bastard on Wall Street gutted your retirement account. It's good to be able to criticize the ineptitude of our government to the point of libel. In Somalia, none of those things seem to make it on the to-do list. People mainly just sit around all day listening to their stomachs growl, waiting for Osama bin Laden's corpse to fall out of the sky. Really any protein source would do, but asking for Rush Limbaugh almost seems a little too greedy. Fortunately, thanks in no small part to the good 'ol U.S. of A., food does fall out of the sky in Somalia and Sudan, and with a much more reliable frequency than if left to … say … Somali warlords. If the God of Moses had amber waves of chemically enhanced grain and a fleet of C-130s, he might have hooked the Israelites up similarly. Nonetheless, this year and in the years to come, we might have to take a few steps back in order to go forward. Needless to say, it's going to take lots of time and ceaseless ingenuity to get those solar-powered air cars off the ground, but think of the money we'll save in road maintenance. On the energy conservation front, we'll probably have to completely cover the state of Nevada with wind turbines just to light up Vegas. That should create a few jobs. Getting off the health-insurance tit will take Herculean resolve, as well. In fact, that job may have to wait until Jesus himself becomes president. In the meantime, until sobering reality sets in, it's time to eat, drink, and be merry. You can do just that this Saturday at Jo's third annual Chili Cold Blood Chili Cookoff. Starting at noon, you can sample chili, enjoy beverages, and listen to music by Chili Cold Blood, Tina Rose & the Jo's House Band, DJ Chicken George, Honeybread, Woodsboss, and more. Chow down. No one will be able to tell if your shit-eatin' grin is really just from the chili.

Get the Luv Doc all up in your inbox every week! Sign up for Luv Doc E-mail!