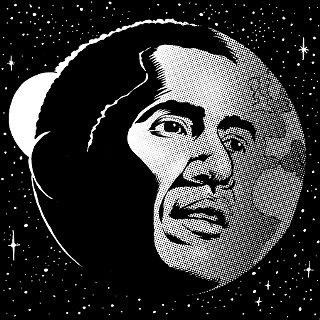 Everyone knows there's something extraordinary in the air. Everyone wants it to mean what they want it to mean. But when a historical moment is as extraordinary as ours, it busts boundaries, defies expectations, and abounds with paradoxes – perversely as disappointing as it is fulfilling, as contradictory as it is inevitable, unavoidably revealing the underside of "normal" and exposing all that teemed beneath the surface of what was and what can never again be. Logical analysis is inadequate, for logic is based on yesterday. All we know about tomorrow is that it's not likely to play by any rules we know.

Barack Obama ascends to the presidency at such a moment in history – a moment he helped create. But it is one thing to have a part in creating such a moment, quite another to control it. It's rare that one can control what one creates.

A year ago, people whose intelligence I respect told me that I ignored the "intangibles" about Obama, failing to understand his "evanescent" side. I still don't know what they meant or if they were right. But when I studied Obama's mission statement in Foreign Policy (July/August 2007), I saw nothing markedly different from America's overseas intentions these last 30 years. Right there, in black and white, Obama praised George H.W. Bush for "the effort to oust Saddam Hussein from Kuwait in 1991." So now I'm not surprised when he surrounds himself with foreign-policy hawks – I'm only surprised at liberals who are surprised.

Two days before Super Tuesday – Feb. 3, 2008 – The New York Times ran a front-page story on how Sen. Obama promised his Illinois constituents he'd make the nuclear industry accountable for leaks in its nukes – then he allowed that industry to write a bill that effectively let them do as they pleased. Those execs reciprocated by joining his cause as highly profitable "bundlers." Obama went with the money, betraying his constituents. So I wasn't surprised last summer when he voted for a surveillance bill that he'd promised to filibuster. Again, all that surprised me was that liberals were surprised.

I wasn't prepared to put faith in a politician who said, as Obama did: "I felt I heard God's spirit beckoning me. I submitted myself to his will, and dedicated myself to discovering his truth and carrying out his works" (The Atlantic, December 2007, p.49). How surprising is it when that man chooses an anti-gay evangelist to mouth the invocation at his inauguration? Obama is appealing to people who share his hierarchical belief in God. And he wants folks who didn't vote for him to have something to cheer on Inauguration Day – which makes a kind of sense. That is, after all, the sort of thing he said he'd do. Inclusive. Nonideological. The surprise, yet again, is that liberals are surprised.

They'd best read David Mendell's biography, Obama: From Promise to Power, in which Obama says, "I never feel like I left what I consider to be the mainstream of American thinking" (p.247). With variations, he repeated that statement often. In picking the sort of cabinet I would have expected of Hillary Clinton, he's living up to what he said. His picks are savvy for a man determined to govern from the center. Given his rhetoric, it's odd that among his top foreign-policy people there is no one who opposed the war from the beginning. Odd, too, that his economic advisers all are Wall Street insiders – not one consumer advocate among them, as yet. But it can be argued that, given the makeup of Congress, Obama needs people who can convince conservatives. (Liberals, as evidenced, need less convincing.)

As for Obama's orchestrations of great masses of people indulging in passionate displays of near-hysteria – historically that sort of thing hasn't worked out well. He exhorted crowds to shout: "We believe! We believe! We believe!" That's when he lost my trust. I kept thinking of Eugene V. Debs, the great radical of a century ago. Once Debs was organizing tenant farmers in the South. As he ended a fiery speech one called out, "Brother Debs, stay with us here, and lead us into the Promised Land!" "Friend," said Debs, "if I could lead you in, somebody else could lead you out."

I thought of that at every Obama mass event – especially when I was most moved. In assuming the mantle of power, Barack Obama becomes Power with a capital "P." I am glad he's president, but I mean to be a responsible citizen. A responsible citizen is difficult to lead, insists on being heard, never takes power at its word, is neither a cynic nor an optimist, and reserves judgment until rhetoric is fulfilled or betrayed by deeds.

Obama's presidency appeals to our cinema-oriented sense of story: An exceptionally extraordinary man comes out of nowhere and takes power in a dangerously extraordinary time. That cinematic aura is part of what got him elected. He is that man, and this is that time, but we'd best remember that this ain't no movie. We need to be a citizenry, not an audience.

We wanted change? We've already gotten more change than anyone sufficiently comprehends. Consider 2008 as it becomes 2009. Barack Obama is an urbane Northern black man elected with roughly the same white votes as Bill Clinton, a charming Southern white man ... at the very moment right-wing Republicans quasi-socialized U.S. housing, insurance, and banking ... just three months after Russia successfully invaded a U.S. ally (Georgia) while suffering no consequences. Those events together constitute a shattering of economic, geopolitical, and social paradigms unique in history. Add the rising might of China, India, and Brazil; the maturation of the European Union (countries that have bloodied one another for centuries acting peacefully in concert); the empowerment of Western women; and the social acceptance, throughout the West, of homosexuality and endless varieties of gender-bending. Throw in the deadly wild card of stateless entities effectively employing violence for political effect the world over. Spike all that with the connectivity of the Internet, the inexorability of climate change, and the euro now an effective competitor with the dollar. Stir it all into the same chili pot, and you have a world no one wanted and few imagined, a world surreal yet unavoidably real, brave or not, that every day races ahead of institutions created to govern a tamer world that is no more.

That is what President Obama faces. A world rearranged, a world in drastic transformation, a world in which no one can be certain of the meaning, force, or value of any of its ferociously contesting elements. Humanity, as a species, is shaken to its core. In such a crisis, "optimism" and "pessimism" are equally vacuous poses. In such a world, "negative" and "positive" are merely two sides of an eight-sided box. In such a world, no one knows what to do, and everyone must try – try our best for our own good no less than for the good of our neighbors, remembering, as Jesus most specifically taught, that even our enemy is our neighbor. The one inescapable fact, deniable by no one, is that we are all in this together. The other inescapable fact, equally undeniable, is that we're each in this alone. Upon the paradox of these clashing facts – clashing yet blending, too – does our fate depend, all and every one of us.

Like it or not, we are sharers in one another's fates as never before, equally doomed, equally blessed, equally at risk, equally participants. So the word "democracy" has taken on new meaning. The world is "democratic" in a brand-new way, in that no one anywhere is separate from our shared crisis and we will rise or fall, survive or fail, unavoidably as neighbors.

And the face of this time, the face of this change, has, topsy-turvy-like, become Barack Obama's – the most enigmatic and emblematic face in our world. A world of startled, unwilling, frightened, eager, yearning neighbors.