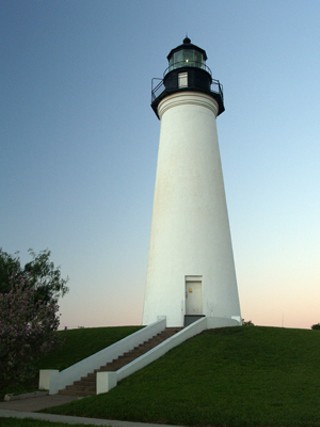 The Port Isabel Lighthouse near the southern tip of Texas still offers a commanding view of South Padre Island and Laguna Madre more than 150 years after it was built. Looking like a giant white candlestick at the mainland end of the Queen Isabella Causeway, it is the most accessible lighthouse on the Texas coast.

In the mid-1800s, the federal government embarked on an ambitious plan to build more than 60 lighthouses along the 1,700 miles of coastline between Key West, Fla., and the mouth of the Rio Grande. Of the 16 major lighthouses built along the Texas coast, only six survive, and the Port Isabel tower is the only one at its original location open to the public. (Of the same era, the Halfmoon Reef Lighthouse was moved to a park in Port Lavaca.)

The town of Port Isabel (population 5,000) began as El Fronton in the 1830s. By 1850, the little harbor was exporting tons of cotton and agricultural products from the Lower Rio Grande region. The lighthouse was built in 1852 to guide ships through Brazos Santiago Pass between the southern end of Padre Island and the mainland.

Constructed of brick, the lighthouse tower is 72 feet tall and 82 feet above sea level. When lit, the light was visible from almost 16 miles away. Mercury-vapor lights installed in the 1990s still function as an aid to navigation.

Occupying the site used by the Army during the Mexican-American War, the lighthouse was nearly as valuable to the military as an observation tower as it was to shipping. During the Civil War, both Union and Confederate troops occupied the post at different times. Spotters were also stationed there during both World Wars.

By 1905, the light was extinguished. It was made obsolete by improved navigation devices, the railroad, and highways. Over the next five decades, the lighthouse sat vacant. The keeper's house was demolished, and the landmark was on its way to becoming an eyesore when it was donated to the Texas Parks & Wildlife Department as a historical site in 1950.

The navigation beacon became an instant tourist attraction when it opened in 1952, two years before the first Queen Isabella Causeway connected Port Isabel to the island. For those willing to endure the tight quarters of the spiral staircase to climb the 75 steps to the top, the view is still magnificent.

The Port Isabel Lighthouse State Historic Site is at 421 E. Queen Isabella Blvd. (TX 100). A replica of the lighthouse keeper's house is now a museum and the local Chamber of Commerce. The lighthouse is open for tours seven days a week, 9am to 5pm, during the winter and Sunday-Thursday, 10am to 6pm, and Friday-Saturday, 11am-8pm, during the summer. A nominal fee is charged for entering the lighthouse. For information, call 956/943-2262 or go to www.tpwd.state.tx.us/portisabellighthouse.