Your Style Avatar kicks ass. But you knew that already.

Gail Chovan displays the last hair-rah before she prepares for chemo. Hair by Deborah Carter. (Photo by Todd V. Wolfson)

A KICK IN THE ASS An e-mail arrived asking me to attend the Kick Ass Awards produced by the fabulous Spike Gillespie. My friend and regular "After a Fashion" photographer Seabrook Jones was receiving an award for his dedication to the Austin Public Library. Sadly, I realized that the awards were scheduled for 7-9pm Friday and I would not be able to see Seabrook win, as my sister, Margaret, had told me well over a week before that she wanted me to block out that very time for a private meeting. Then another e-mail announced that my friend Bob Dailey was being honored with a Kick Ass Award for his contributions to AIDS Services of Austin. But again, the time conflict would make me have to pass. I figured I'd wear something nice for dinner with Margaret, and indeed, when she picked me up around 6pm, she had on cocktail attire as well. I didn't ask where we were going, but as we headed toward Lamar (avoiding the messy water-main break), I began to wonder. We pulled up to BookPeople, where the awards are held, and Margaret explained that she knew I wanted to see my friends be honored, so we'd drop by before dinner. Cool. The presentation began, and one of the inductors, Chronicle Editor Louis Black, began to introduce the next winner, who turned out to be ... my sister, Margaret. I applauded her heartily. But her acceptance speech began to take on a different tone as I realized that accepting this award had her already in place to present the next Kick Ass Award to ... me. I was shocked but bounded up onstage just as my iPhone started ringing. "Just a minute, y'all," I said to the crowd. Just kidding, of course. In my enthusiasm for winning, I said something like, "I'm so proud to be a part of this fucking community ..." forgetting that it was a family affair and was chastised by Margaret. Nothing could dampen my good spirits that evening, and the next day, as I was placing my award on a revolving stand in a well-lit, mirrored niche on my mantle, I began to re-enact the final scene from All About Eve. With me, an aging, pathetic, and terminally ill queen posing as an ingenue in my own living room with a tablecloth draped around my shoulders, clutching my award, and solemnly bowing to my imaginary audience. Kickass, indeed.

NOTES For almost 10 years now, Blackmail owner Gail Chovan has been my oldest and best friend here in Austin. She has completely reshaped my viewpoint on Austin and fashion and remained a favorite fashion icon in my pantheon of characters. Gail, with her signature waist-length tresses, is an instantly recognizable local legend. I did not see her at last weekend's birthday party for 58-year-old Alejandro Escovedo at the fab new Hotel Saint Cecilia (www.hotelstcecilia.com) or at the Jingle Ball (don't ask why I missed it after so many years), but Todd Wolfson's photo of her from Alejandro's party conveys the glamour that follows her everywhere. Pardon the play on words, but this hairstyle was Gail's last hair-rah – the final 'do before she shaves her head in preparation for the chemotherapy to combat her breast cancer. She, like me, was hit with a cancer diagnosis at age 50 (the Fatal 50s?), but also like me, I'm sure she'll survive this devastating forecast. I know you join AAF in wishing her the very best... AAF also sends its love to Giacomo Forbes, the quick-witted and friendly hairdresser (www.giacomoforbes.com) who just unveiled his fabulous new GF Organica Hair Oil treatment. Sweet Giacomo suffered severe injuries after he was attacked Downtown during the holidays and is said to be recovering well.

AN APPLE A DAY? I am absolutely plucked. In my constant pursuit of living the Apple dream, I found myself all curled up on the couch in front of a fire, writing my entire column (this one) on my iPhone. I used Notes – an application (I mean, um, app) that has revolutionized my life. When I opened the e-mail to myself, I laughed at what I had written and was inspired to start on a whole new riff. I hit reply and began writing a hilarious account of something. I kept being interrupted, of course, and after a while, I kept my eye on the battery power indicator; I knew if I didn't save my reply as a draft, I'd lose it if the iPhone powered down. The battery power remained full for a fairly astonishing amount of time, and I pecked away merrily until ... until ... until the phone shut itself off at about 600 words of text. That battery-power indicator had lied. My dream of a totally iPhone-made column vanished. So now, I've dragged myself up to my cold loft and am pecking away on the ol' Mac PowerBook again, signed, NOT sent from my iPhone. 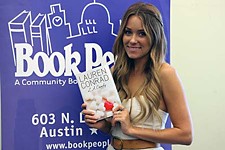