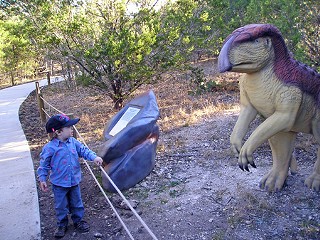 Dinosaur World in Glen Rose, Texas, disguises learning as play. Amateur dinosaur hunters have no trouble finding the more than 100 life-sized models among the trees and underbrush of the Texas hills.

At first apprehensive about visiting the snarling giants, my 3-year-old grandson quickly lost his fear of the inanimate creatures. His self-appointed title of "animal keeper" had him leading the way and squealing at every turn of the sidewalk, "Look, there's more."

"Our core audience is the 3- to 12-year-olds," says Nicole Randall, marketing director for the three locations of Dinosaur World. "Of course, any age with an interest in dinosaurs will enjoy the park."

Scientists can only make educated guesses at what the dinosaurs looked like. The color and texture of the hide covering the skeletons has been lost to time. The result is an artist's rendering that often seems whimsical and fantastic. Randall assures visitors that each rendition is based on scientific fact.

The idea for the outdoor dinosaur museum began in Germany, where the curator of the Natural History Museum near Munich helped develop the concept. Swedish businessman Christer Svensson brought the idea to the U.S. The first Dinosaur World opened at an old alligator farm near Plant City, Fla., in 1998. Five years later, the Svensson family opened a similar park in Cave City, Ky. The Texas location opened in March 2008.

What better place for a dinosaur theme park than in "the Dinosaur Capital of Texas"? Dinosaur tracks were discovered in the Paluxy River outside of Glen Rose in 1909. At Dinosaur Valley State Park, the tracks frozen in the riverbed look like fresh footprints in the mud.

"Glen Rose already had the atmosphere to attract dinosaur hunters," Randall says. "I don't think we could have found a better place in Texas to put our park."

The dinosaurs were built on-site using fiberglass, steel, and concrete. Some of the long necks stretch two stories above the treetops. The biggest prehistoric monsters weighed several thousand pounds while the smallest are the size of a large dog. Each species has a sign telling its story. But no story can inspire the imagination like seeing a life-sized replica of what the dinosaurs might have looked like.

Dinosaur World is near the entrance to Dinosaur Valley State Park outside of Glen Rose. The eight-tenths-of-a-mile walk is an easy stroll and is ADA accessible. There is also a museum of dinosaur fossils, a covered picnic area, a playground, a fossil dig for the kids, and a gift shop that will appeal to all ages. Well-behaved pets on a leash are welcome to join their owners.