Page Two: And Everyone and I Stopped Breathing

What if the government isn't broken?

"and I am sweating a lot by now and thinking of

leaning on the john door in the 5 Spot

While she whispered a song along the keyboard

to Mal Waldron and everyone and I stopped breathing"

Memory combined with perception, desire tempered by experience, a handful of new Polaroids, and a set of gaudy color postcards that blend the present with the past and future.

1. In the wake of Barack Obama's victory, many Americans felt overwhelmed; some were near-ecstatic. Distilling any campaign, especially this one, down to only a few key issues is an exercise in absurdity. Obviously, there were all kinds of reasons people supported Obama. Post-election, this support is evolving into an incredibly wide range of expectations of his presidency. One widely embraced theme (though neither the dominant or only one) is Obama's focus on unity rather than division, on the need for the coming together of citizens as Americans, all of us invested in our country's future.

It is sometimes surprising to realize how many Americans reject this unity as not just a fairy-tale fiction but an unholy, utopian vision that is really fascist rather than patriotic. It is not just that they reject unity because the candidate they didn't support won, but rather that they have a vicious distrust of unity. Many Americans assert that the problems this country is facing are mostly very simple, but they have been complicated by other Americans – because of their stupidity, idealism, or actually overtly treasonous allegiance to "foreign" philosophies, ranging from Marxism and communism to Zionism and secular humanist relativism. Many seem quite comfortable in the combative divisiveness of partisan politics, because it invites adversarial antagonism, in which some find confirmed their moral, intelligent, and patriotic superiority.

There are those, such as the radio and television pundits, who make their livings by singing the praises of this country and at the same time supporting an almost isolationist patriotism. They love this country but demonize a healthy percentage of its citizens, whom they denounce and expose, casually insisting that those with whom they disagree are motivated by evil, immorality, and brain-damaged perceptions.

2. The first major post-election flanking maneuver has been to ignore the tremendous diversity of those attracted to Obama. Lumping them all together as though they are just one serves to characterize them as a dehumanized and deluded mass.

3. On Election Day, people were overwhelmed for any number of reasons, none of which are mutually exclusive. There are those who have faith that Obama will be the best president that he can be, a genuine leader and a uniter. There are those who do have irrational expectations of what he can do, as well as those just relieved that the eight-year nightmare of the Bush administration is finally approaching its end. Certainly some of the joy and enthusiasm is because he is the first African-American elected president of these United States – this happening only a century and a half since the end of slavery and not quite half a century since the American Congress took legislative action to end legal, government-mandated segregation. This achievement is accentuated because so many voted for him not because of his race but because of his ideas, not for parochial reasons but for his vision.

4. Some of the anti-Obama sentiment is driven by old-fashioned, unmitigated racism, but that is by no means the overtly dominant reason. Many still hold on to disproven beliefs – that he is a Muslim, is not really an American, and is going to take this country in a Marxist or fascist direction. Others argue that he is all talk and no action. Thus Americans have fallen for the inspired thoughts of the factually disinterested public figure Rush Limbaugh, who labeled him an inspirational speaker who offers no substance but just sheer demagoguery. Even though this came from the demagogue's demagogue, rather than being a compliment, it is meant as damning criticism. It is way too early to tell what Obama's presidency will accomplish, but these comments are juvenile.

5. Keep in mind that many of these anti-Obama critics supported George W. Bush, not once but twice, for presidency. One might think that as a simple act of contrition they would wait until the new president took office before assailing him with slander, innuendo, and accusations. Instead, we get Sean Hannity sincerely telling Karl Rove that he feels the Bush presidency has been dramatically undervalued and that the Democratic assaults on Bush handicapped his presidency. This point of view is not exactly a challenge to Rove. According to many in this opposition, those of us who support Obama and eagerly await his presidency are sheep: foolish, naive, and so stupid that we expect Obama to walk on water and deliver the people from their mortgages by spreading manna from heaven. Now maybe, just maybe, we are sick of hearing Americans attacking Americans. Maybe the problem with Republican vice presidential candidate Sarah Palin was not sexism but that, regardless of the topic, whenever she spoke, her driving theme was divisive – taking the position that there are good Americans and a good America, and then there are the out-of-touch elites whose patriotism is questionable.

6. Maybe the expectation is not that he'll walk on water or make oil sprout up from the ground just by touching it with his staff. Maybe it is just that, rather than feed the people double-talk, encourage division, and homogenize and pasteurize problems for general consumption, he'll talk straight, laying out problems and the options to solve them. It won't make the next years any easier, but it might find us more united and focused.

I. Although they differ on almost all details, there is an impressive number of political groups, ranging across the political landscape in terms of ideology – liberal, conservative, middle of the road, radical extremist, leftist, rightist, fascist, communist, and mainstream – that agree on one thing. This is that there is a major problem with this country and with its government: The United States' democratic, constitutional republic is severely broken, dominated by and in service to special interests rather than the public good, manipulated by corruption, and ill-served by public servants and elected officials. These groups believe our government is now hopelessly inadequate, severely corrupted, and in desperate need of substantial foundation and structural repairs.

There is as wide a range of solutions offered as there are groups harboring such perceptions. They range from the moderate – term limits, campaign finance reform, more political parties – to the extreme – armed revolution, tearing down this Sodom to rebuild America glorious anew.

Most of these solutions would require severe reconstructive surgery be performed on the Constitution; at the same time, their built-in problems are for the most part ignored. Term limits not only negate the democratic republic ideal but in addition guarantee the triumph of bureaucracy over elected officials. Those who advocate multiple parties ignore how marginalized, extremist parties can have disproportionate amounts of power because of their roles in some multiparty coalition governments.

II. What if the perception of the problem is the problem? What if the government, though it may have cracks and show plenty of wear, in general isn't broken? No matter how the majority of citizens regard it, what if the government now is about as good as could and should be expected under the rather overwhelming circumstances – the size of the country, its population, and the enormous costs involved in running it? Much of what are perceived as flaws are direct consequences of the governmental structure laid out in the Constitution.

III. What if, pitched against the achieved reality of current government, there is not a reform movement but just an extravagantly imagined fantasy? If the former is judged by the latter, won't it always come up short? The latter is a fantasy, lacking details and not road-tested but instead just an individualized ideal of a working government. What if the many different approaches to changing and improving it end up doing very much the opposite?

What if this perception of ruin and the likelihood of fixing it are obligated more to some hopeless ideal more than to any reality?

IV. The idea of this country is that its 300 million citizens all share the exact same rights in relationship to the government. Conceptually, at least, shouldn't the role of the government be almost exactly the same with each citizen?

V. Each of the 300 million citizens expects an almost direct relationship between him- or herself and the government that actually allows him or her some degree of power.

VI. Arguably, flawlessly achieving the ideal or even coming close is impossible. What if the very decency and ambition of this concept was what made it so problematic?

VII. Almost all groups want the government "reformed": to be more "representative" and less influenced by special interests. But almost all who feel this country is so grievously broken fail to address some very basic issues:

What kind of government will we have and how will it operate once all the impurities are filtered out? Specific policies are rarely discussed, except in opium-dream terms. The broadest generalizations are offered up as easy and achievable cures. Are the problems really created by intentional sabotage and waves of corruption?

The devil, as they say, is in the details. Is it not possible that when broad generalizations are translated into mundane policies, the very ideological fights that now exist will be re-created?

VIII. There is a core contradiction to the paradigm that the problems facing this country are, for the most part, caused by other Americans. The very framing of the problem in that way – as well as any solution, no matter how it is structured – are inherently and overwhelmingly unconstitutional.

The basic constitutional idea is that all people are empowered. The Constitution places law above men, not as a fascist vision but as one of equality: constitutional rights trump class, family, wealth, political power, and economic and social standing.

When any group feels forced to step above or outside the law to "correct" perceived wrongs, not only is the baby being thrown out with the bathwater, but the bathtub and water supply system are being thrown out as well. All of them dumped on top of the Constitution. 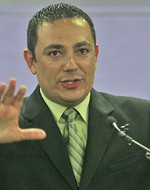