Gay up that vote, y'all

Tweet
print
write a letter
GAY THE VOTE A few things I will take personally until the grave, no explanation needed: Our government's "response" to Katrina, gay-baiting the 2004 election to dupe evangelicals, lying to justify an evil war (Iraq) to avenge a loss (Daddy's face? Pathetic), Abu Ghraib, our complete and utter lack of standing in the world community, and Karl Rove. There is nothing George W. Bush can do to make amends. He's screwed the pooch. And John McCain is just as pathetic and desperate in his quest for what he thinks is rightfully his (bitch, please), and he will do anything to get close enough to just sniff the pooch. And in these attempts, he's toying with the same brand of scorched earth politics as his cretinous predecessor: Socialist? (Are you freaking kidding me?) Terrorist? (OMG.) Celebrity? (What are you ... like, 12 years old?!) These are tactics once thought beneath the respected 26-year senator from Arizona. You'd think the old war horse would wish to live out his golden years in dignity. But, no, crawling through his own muck has become him. This year is about dignity. I could go on about "better angels" and how liberating it felt to early vote, but instead, I encourage you to head to the polls, right now, if you are reading this before 7pm on Friday or on Election Day proper, Tuesday, Nov. 4. And if you'd like to help our larger LGBT family, especially those out in California fighting for our dignity, I invite you to check out the No on Prop 8 website: www.noonprop8.org. See Now & Later. 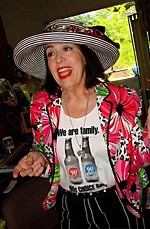