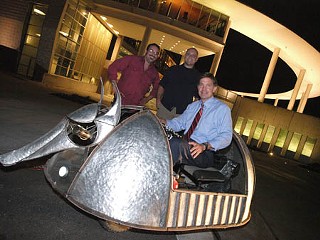 Will Wynn drives the “Best of Austin” award-winning Carmadillo. (Photo by Seabrook Jones) 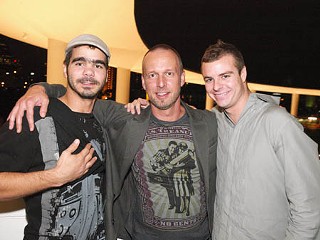 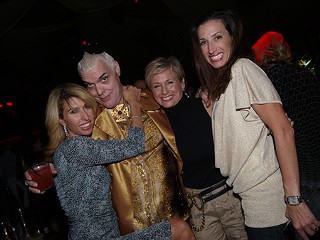 Some of the beauty that surrounds me: (l-r) Maria Groten, Your Style Avatar, Nina Seely, and Kimberly Thomsen (Photo by Seabrook Jones) 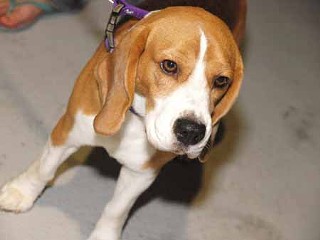 The hit of the “Best of Austin” party, Westminster Best in Show 2008, Uno (Photo by Seabrook Jones) 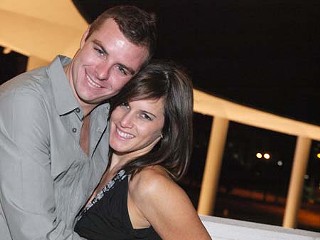 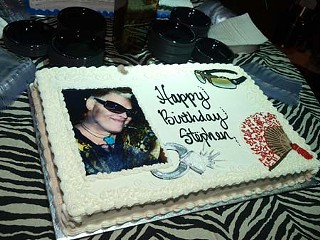 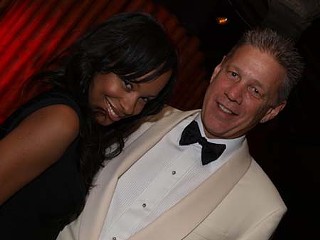 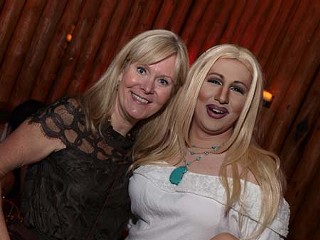 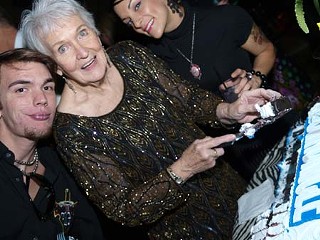 My nephew Tyler Moser, my mother Phyllis Stegall and my dear friend Jaclyn Havlak cut the cake at Pangaea (Photo by Seabrook Jones) 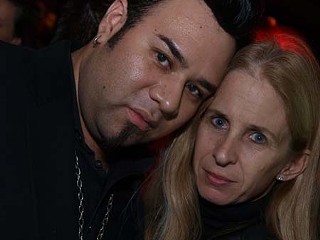 Neil Diaz and Gail Chovan looking creepily morose at my party. (Photo by Seabrook Jones)
THE BEST OF EVERYTHING Omigod, I can hardly begin to recount the tales of the last two weeks. Photo shoots, cocktail parties, interviews, luncheon parties, doctor appointments, birthday parties, a mysterious crime that haunts me, dinner parties, glamorous clothes, tea parties, jewelry, parties, bed jackets, parties, ashtrays. ... It sounds like a Douglas Sirk movie and certainly has felt like one. So let's just slip on our Lana Turner cat-eye sunglasses, wrap a scarf around our bouffants, and briefly revisit, shall we? I had a very bonding moment with Gretchen Phillips at SafePlace's fabulous fundraiser at the Austin Music Hall. She snatched my press pass from me, wrapped it around her breast, and broke into "It's Impossible" from Valley of the Dolls. I, in turn, serenaded her from the Music Hall's balcony with "Come Live With Me" from the same film. Such kindred spirits, we're practically related now. The wonderful Olga Campos emceed, and Glover Gill with Glovertango and Graham Reynolds' Golden Arm Trio performed. With a beginning like that, I knew I desperately needed new hair to face the rest of the week and saw the crew at the "Best of Austin" award-winning Salon Intuitions for some high maintenance before the social onslaught, including my photo shoot and interview for L Style G Style's anniversary issue. Loved my hair and love Lynda and the girls, who took such great care of me that I felt compelled to dive into a weekend of partying and entertaining that had me sleep through the Alzheimer's Walk, which some of my family participated in, and my dear friend Susan Hammer's 70th birthday. I've been too embarrassed to write her back and explain myself. I did surface for a ladies luncheon on Tuesday at Primizie Osteria with Karen Landa, Carla McDonald, and a radiant Anne Elizabeth Wynn. Judging from the other clientele, Primizie's just about the chicest restaurant on the circuit right now (sorry, parkside, you just weren't open). Ran right into Primizie again the following night, dishing out delights at our annual "Best of Austin" party. And bay-bee what a party that was. I received an award of my own from our wonderful readers: Best Scenester/Mover & Shaker. I thank my readers and fans. Without you, I'm nothing. You are the air that I breathe and the products I put in my hair. It was the best "Best of Austin" party ever (thank you, Kate and Erin!). To celebrate my victory, I dragged my nephew Tyler out to take a walk on the wild side with me, diving into the fab Beauty Bar, where we hung out with Gene Griffin and the band he manages, Bankrupt & the Borrowers. Then it was to the Creekside to watch "Best of Austin" award-winner DJ Orion and to Elysium for a nightcap. That gave me the courage I needed to sleep all day Thursday in preparation for my 51st birthday party Friday night at Pangaea. Of course, my birthday's not until the 25th, but I was so excited about still being alive that I just couldn't wait and invited 500 of my very closest friends to be at a shindig in my honor. Pangaea's Steven Seymour, Jill McGuckin, and Dave Voorhees made it happen, and by the time I arrived at 8:30pm, it was like a Hollywood premiere. Limousines, paparazzi, screaming fans, klieg lights ... well, okay, I exaggerate. But only slightly. Once inside, I made a beeline to the boys' room to check my make-up (I've been wearing eyeliner since long before it was called "guyliner"), and that was my fatal mistake. That meant that without being flanked by a wedge of armed Secret Service agents (hi, Andy), I was doomed to have the receiving line be the same line as the one for the bathroom. I couldn't possibly elaborate on that, but as I eyed the splendidly decorated banquette reserved for me across the sea of friends, I yearned for a fainting couch from which to hold court. The vodka from 42Below ran in rivers ... or at least in thousands of glasses holding concoctions. The food by the new Graze Catering (www.grazeaustin.com) was splendidly superb (I had their food at a recent Neiman Marcus event), and their service was friendly yet impeccable. The two cakes from perennial "Best of Austin" award-winning Lucy's Cakes (one bearing the Chronicle logo and another with a paparazzi shot of me on the cake surrounded by fans, jewels, and sunglasses made of icing) were decadently delicious, and DJ Sliver made the turntables and our heads spin with an updated assortment of the dance music I love best. Neil Diaz coordinated everything (for his new company NCD Resources – dear God, Neil, Sliver, and I go back a long way now). Glorious retro botanicals were by Big Red Sun, and flowers were from Ben White Florist (thank you, Christine Ann!). After the club's afterparty, my selected posse dropped by Rain on 4th briefly (imagine, if you will, Nina and Frank Seely at Rain) before retiring to the deck at Momo's for an after-afterparty, where we lounged soddenly until I bullied the saintly Paul Ovesi into having an after-after-after at his swank pied-à-terre. We lounged decorously and luxuriously there until nearly dawn before adjourning to my after-after-after-afterparty. The last ambulatory guest left around 11am. I don't know when the rest of them left. I don't know when I woke up. I don't know anything except that I am the luckiest queen on earth to have such loving friends (for more on that, see the upcoming segment about me on KLRU's Downtown series, airing Thursday, Nov. 20). Last year, I didn't think I'd be here for another birthday, but I'm pretty damn glad that I am ... now.
More After a Fashion columns