Sausage lovers will be in hog heaven at Fischer's Meat Market in Muenster, Texas 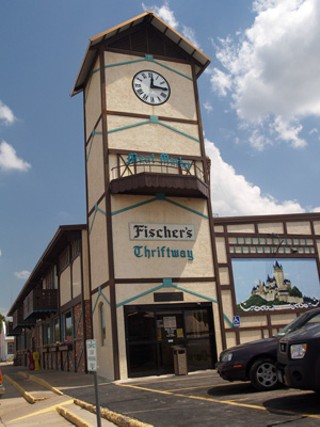 Fischer's Meat Market in Muenster, Texas, isn't your ordinary small-town grocery store. It's a supermarket of sausages. Besides having well-stocked shelves of kitchen products, rows of specialty food items, and a wide selection of import beers, the meat market makes more than 30 different kinds of sausage.

Freshness makes Fischer's tube steak a standout in the crowded field of Texas sausage-makers, says Penny Fisher. It helps that the Fisher family owns the feedlot that supplies the raw materials for 15 butchers. The livestock and a large percentage of the store's vegetables come from farms and ranches in the area.

Although it is just a small part of the business at Fischer's USDA-inspected processing plant, the crew churns out 2,200 pounds a day of ground beef and pork mixed with a secret blend of spices handed down through generations of Fishers (the family dropped the "c"). "Our sausage also is a lot leaner than most other sausages," Penny says.

On the rolling hills of North Texas, 15 miles west of Gainesville, Muenster was named after the capital of the Westphalia region of Germany. Twenty-five German immigrant families moved to the town site on Jan. 1, 1890. For more than a century, farming, oil, and livestock have sustained the residents, many who trace their lineage to the German Catholic settlers.

Two brothers, Joe and John Fisher, started a little grocery store and butcher shop in 1927, just as the Dust Bowl and the Depression were gripping the Plains. Offering good service and great food, the brothers held on during the economic downturn and prospered after World War II.

The brothers sold the business to John's two sons in 1975, and in 2005 it was passed on to grandson Steven Fisher, Penny's husband, and his brother-in-law Stanley Hess. When the market moved to its third and current location, Steven's mother insisted that the new building include a glockenspiel. The traditional German clock tower plays music on the hour with seven figures coming out of a door like a giant cuckoo clock. It is one of only a few animated glockenspiels in the U.S. and possibly the only one in Texas.

If you prefer your sausage served on a plate rather than wrapped in white butcher paper, Fischer's sausage can be found along with other German food in Muenster at Rohmer's Restaurant, 217 E. Division St.; at the Center Restaurant & Tavern, 603 Hwy. 82 E.; and across the street from Fischer's at Doc's Bar & Grill, 113 N. Main, which occupies the former hospital building.

Fischer's Meat Market is at 304 N. Main in Muenster. Along with picnic supplies, sausage, vegetables, custom meat processing, and a variety of cheeses, the market supplies holiday smoked turkeys and hams. The store is open Monday through Saturday, 6am to 7pm, and Sunday, 9am to 5:30pm. For information, call 940/759-4211 or go to www.fischersmeatmarket.com.