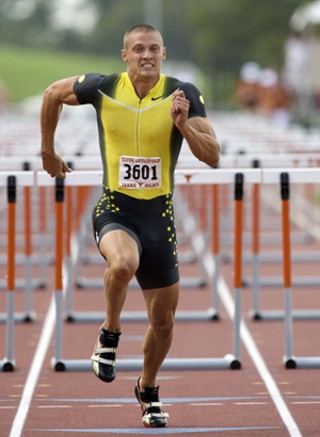 Decathlete Trey Hardee (Photo courtesy of the University of Texas)

Bryan Clay. Does that name mean anything to you? No, I didn't think so. But Clay, 28, is the greatest athlete on the planet.

There was a time when that statement wouldn't have been taken as a matter of opinion. It would have been an incontestable fact. Clay's face would have been everywhere. On the cover of Sports Illustrated. On Wheaties boxes. Now my guess is that 90% of Americans don't even know Clay's name, and I can't blame them. I had to Google the phrase "2008 Olympic Decathlon Champion" to come up with Clay, who was born in Austin but now lives in Hawaii.

I had, of course, been keeping up with the track and field events in Beijing – or trying to, anyway. To my mind, the decathlon is the premier Olympic competition, a complete test of pure athleticism. But the executives at NBC didn't agree. Evidently, their assiduous market testing had determined that what viewers really want to watch, night after night, over and over and over again, is men's synchronized diving. In fact, I never managed to catch a single decathlon event – not the 100-meter sprint, the discus, or the long jump, all of which Clay won, finishing with 8,791 total points, just ahead of silver medalist Andrei Krauchanka of Belarus and bronze medalist Leonel Suárez of Cuba, becoming the first American since 1996 to win the event. Austin's Trey Hardee failed to finish the last three events of the competition.

Clay's achievement should be a big deal. That it's not says a lot about the confused nature of celebrity in American culture. The advent of modern sports gave men, and more lately women, venues for actually winning the sort of prestige that had come to others only through accidents of birth. That still happens, of course – witness Michael Phelps or Jamaica's Usain Bolt. But as the historian Daniel Boorstin once pointed out 30 years ago, all too often the qualities that now "make a man or woman into a 'nationally advertised' brand are in fact a new category of human emptiness." (Exhibit A: Paris Hilton. Exhibit B: George W. Bush.)

Apparently postmodernists all, we're cool with that, and Bruce Jenner is just whistling in the wind when he asserts that an Olympic decathlon winner deserves our culture's highest praise. Michael Phelps is the greatest swimmer ever. Michael Jordan, the greatest basketball player ever. But neither, said Jenner, is or was the greatest athlete on the planet, for the reason they simply couldn't complete a decathlon. "They'd die," Jenner told Sports Illustrated. "They'd make no money, they'd train eight hours a day in virtual isolation, there'd be no hype, no nothing."

We can disagree with Jenner – and perhaps should. That's half the fun of being a sports fan, arguing about these things. But even if we have other ideas about what defines overall athletic supremacy, we should still take a moment to celebrate Clay's achievement with more than an indifferent shrug.