Saw one once. Summer of 1981. It was unidentified, flying, and definitely an object. My brother David and I were visiting friends who lived in an adobe home without plumbing in the mountains 50 miles northwest of Santa Fe, N.M. True I'd had a beer, maybe two. I was a little buzzed, but far from drunk; nor had I imbibed hallucinogens, pot, etc. (I never do). Having to pee, I stepped out into a very black night brilliantly canopied by what seemed like the entire universe. The adobe was in a small, deep valley, flanked on the east and west by steep, high ridges. I was facing east, contentedly relieving myself under the stars. My gaze panned from north to south – and there it was.

Very close. Maybe a half-mile – I gauged that by its relation to the road. Straight up the hillside, near the top. Round – perfectly round, it seemed to me. Rotating slowly like a flat metallic wheel, with small red and white lights near its circumference, it radiated a vague glow of its own. Noiseless. I saw it full for a moment, then, in less time than it takes to tell, it sank below the ridgeline – down into the next valley, I presumed.

Zipped myself, ran inside, told my dear ones I'd seen something and I was going to look for it, and – having seen way too many movies – added that if I didn't come back in a couple of hours they should call ... somebody. Alas, I drove up and down that road and found only a deep-rutted truck path over the ridge that my low-slung '69 Chevy couldn't manage. As for hiking up in the dark – being a city-bred tenderfoot, that seemed a bad idea, UFO or no UFO. We all hiked up in the morning but found nothing that looked unusual to our untrained eyes.

The Los Alamos National Laboratory perched in higher mountains about 50 miles south as the crow flies. Maybe it was something from the lab, we figured – or something interested in the lab. I gave it no more thought than that. I saw what I saw.

That same year, my friend Richard saw what he saw: a long, wide, gray-glowing oblong passing low and humming over a ranch house in which he was a guest, some miles south of Austin. And dear Dixie – who died this year not long before her 91st birthday, and who in our long friendship never told a fib – saw what she saw when, driving a two-lane one night in the Panhandle between Matador and Clarendon, she was accompanied (followed?) for miles by a large glowing disc above and to her left.

I mention these sightings now because, however unusual they may be, they were, in a way, not as unusual as finding an op-ed article in The New York Times headlined "Unidentified Flying Threats," highlighted in bold with the words "Why we should be more curious about U.F.O.s" (July 29, p.19). The newswires and some good newspapers are not above reporting UFO sightings when witnesses are many and reputable. But a serious UFO article on the editorial pages of the "paper of record"? Was it a joke?

Nope. The article was by one Nick Pope, identified as the author of Open Skies, Closed Minds, a man who "was in charge of U.F.O. investigations for the British Ministry of Defense from 1991 to 1994."

Well, that made things slightly more explicable. Americans won't do, but the Times will print it if a well-credentialed Brit writes it.

Pope cites several instances. On Nov. 7, 2006, in broad daylight, "pilots and airport employees at O'Hare International Airport in Chicago saw a disc-like object hovering over the tarmac for several minutes." Radar didn't pick it up, but Pope's point is, "Stealth planes are designed to be invisible to radar, and many radar systems filter out signals not matching the normal characteristics of aircraft." He sees UFOs as a national security issue, questioning whether our government can afford to ignore the phenomenon. (Why presume our government ignores it? Official U.S. investigations ceased in 1969; secret investigations may well continue. Richard told me that the military was all over the county the day after his sighting, and certain areas were, for a short time, closed to public access.)

Pope writes that "Britain and France ... continue to investigate U.F.O. sightings, because of concerns that some sightings might be attributable to foreign military aircraft breaching their airspace, or to foreign [read: U.S. and Russian] space-based systems of interest to the intelligence community." For instance, on Dec. 26, 1980, "two American Air Force bases in England reported seeing a U.F.O. land. An examination of the site turned up indentations in the ground and a level of radiation in the area that was significantly higher than ordinary. ... The deputy base commander reported that the aircraft aimed light beams into the most highly sensitive area of the base." And there have been enough near-misses "between U.F.O.s and known aircraft ... to prompt the Ministry of Defense and the British Civil Aviation Authority to advise pilots, if they encounter anything, 'not to maneuver, other than to place the object astern, if possible.'"

Nick Pope isn't alone in his call for the U.S. to investigate UFOs. Reuters online, Nov. 13, 2007, reported that "An international panel of two dozen former pilots and government officials" agree. "'It would certainly, I think, take a lot of angst out of this issue,' said former Arizona Gov. Fife Symington, who said he was among hundreds who saw a delta-shaped craft with enormous lights silently traverse the sky near Phoenix in 1997."

Lessen the angst? I wonder. At the O'Hare sighting "mechanics, maintenance workers, and a pilot all saw the craft, which made no sound as it sat motionless in the sky for minutes, and then shot up out of sight, leaving a perfectly circular opening in the cloud cover" (The Week, Jan. 19, 2007, p.3, citing The Chicago Tribune). "[One] employee was so shaken by his otherwordly vision ... that he's experienced 'some religious issues.'"

Believers the world over would experience "some religious issues" if ever an official, public consensus was reached that UFOs exist and that they ain't from around here. Just for starters, whether you believe the Quran, the Tanakh, or the Bible, your creation stories would be pretty well shot to hell in terms of anything but metaphor – and no one should be flip about the undermining of faith on such a mass scale, not even the world's urbane intelligentsia. Our universal use of the term "aliens" for interstellar life-forms is a giveaway that we too believe we are the center of creation. However much we may cherish Star Trek, The X-Files, Babylon 5, Dr. Who, or Battlestar Galactica (whose writers coined the useful usages "frak" and "frakkin'"), proof that there are technologically advanced species who can fly rings around us might be unsettling, since they've probably not read Proust and care nothing for the application of semiotics to feminism, queer theory, and the cinema. As a concept, officially confirmed "alien" activity would be as sobering as it is intoxicating.

Given the variety of unidentified flying objects seen by reliable witnesses, one may justifiably speculate that a variety of Other Folk are interested in us. Why? Astronomer Carl Sagan gave a cogent reason in his book Intelligent Life in the Universe: Since the commercialization of radio in the 1920s, our planet has emitted an increasing intensity of electronic signals. To electronic telescopes elsewhere, it might be as though a blank space in the galaxy suddenly became incredibly bright and keeps getting brighter. That would be worth investigating. Thus, 20 years after the advent of radio, UFO sightings began to be reported worldwide. Makes sense. Somebody – "aliens" – might want to know who's new in the neighborhood.

I'll vote for Barack Obama, but I'm not a fan. Still, I liked him best the other day on MSNBC (Aug. 4, Hardball With Chris Matthews). A nervous local newsman – from, I believe, the Midwest – asked if, as president, Obama would reveal the existence of "aliens" if he had "positive proof." Said the presumptive nominee, "It depends on what these aliens were like – and whether they were Democrats or Republicans." 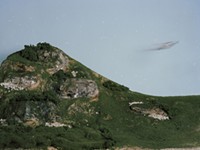 "Rebecca Marino: The Best Available Evidence" at grayDUCK Gallery
The exhibit drops viewers into the middle of the mystery of UFOs, but without providing any answers