Page Two: Other Shoes, Other Feet

Republicans blame it all on the Democrats, while outraged activists flirt with censorship

Things have a through-the-looking-glass quality a lot of the time around here (at the Chronicle, in Austin, and in America), even when things are calm, but current events have stretched my brain to near-bursting.

Republican politicians and pundits routinely attack the Democrats by pointing out that if they come to power, they'll raise taxes and wreck the economy.

Bush passed massive tax cuts for the very wealthiest Americans at the beginning of his administration, but in many cases, those cuts have gradually increased over the years – which means not only are they the cuts as originally passed, but they are now deeper than they used to be. Yet the economy is not thriving as promised.

Claiming that increasing taxes will harm the economy seems disingenuous, as the economy is in terrible shape despite the passage of the cuts. The decrease in tax revenue, the insane spending of the Congress, and the Iraq war have resulted in massive deficits. The Democrats are not being reasonably indicted but instead damned by sleight-of-hand demagogy.

If the Republicans had spent the first six years of the Bush administration acting like Republicans, it would be one thing, but instead their spending was so outrageous and excessive it made drunken sailors look restrained and responsible.

Now, the perception of "taxes" might make the bogeyman seem like a family pet, but at some point or another, all that borrowed money is going to have to be paid back. This is not because of the Democrats.

The Republicans have also spent a long time railing against regulation. By gutting different parts of the government, they were going to prove their point. And they have.

Right now, this country is in an economic crisis because of our outsized debt and the enormous failures resulting from the underregulated subprime mortgage market. The dollar is falling for any number of reasons, but these have to be two of the more important ones.

If McCain is elected, who do you think his economic advisers will be? And one has to wonder why the plan to save Social Security by allowing private investment in the stock market instead is no longer being discussed.

Currently, many of the Republican members of Congress are taking to the floor (even though Congress is not in session and the lights are off) to denounce the Democrats for not yet passing an energy bill. During the six years they controlled the two branches of government responsible for legislation, the Republicans did not pass an energy package that would in any way address the problems this country is now facing.

Quite dishonestly, the Republicans are championing any and all drilling in this country to help solve the current crisis. I've yet to find any source, regardless of its politics, that claims this new drilling would result in increasing oil and gas supplies in fewer than five years; most estimate it would take from seven to, for some of the fields, as many as 15.

There has been an interesting but, as usual, overly vitriolic discussion on this topic in the Chronicle forums. One person's post pointed out that just legislating to allow the drilling would immediately result in a lower price for oil. Given that some experts expect that price to tumble soon, while others think it will continue to rise, this is anybody's guess. Still, I hadn't really thought about the PR effect on the price, which is likely.

If our beloved Republican legislators did not state that this drilling would salve wounds sooner than is at all possible, claim that it would dramatically affect supply and price at the pumps, or declare this an important step toward energy independence, it might be easier to take them seriously. Again, I've yet to find an authority that states that this drilling will significantly affect supply and cost or that it will lead us to energy independence. The Republicans are falling over themselves to try to sell a bill of goods to the American voter. One can hardly blame them; it's worked so many times before for them.

There is a very small group that would immediately profit from expanded national drilling: gas and oil industry executives. The rest of us would have to wait to see if most of us would reap any significant benefits.

Karl Rove brags that the Bush administration has spent more money on researching alternative sources of energy than any previous administration. This may well be true, but too much of that money has gone toward ethanol, while a whole other range of options, from solar energy to energy conservation, either saw tremendous cuts in funding or were simply ignored.

The horse is not only out of the barn; it is in the house, breaking furniture.

This is not to praise the Democrats or admire them as principled and conscientious. On this issue, there are too many hypocrites in every direction. Still, there are a number of reasons I heap more abuse on the Republicans. They were in complete control of the government for six years. Republicans did not act or legislate like Republicans. When speaking of issues they failed to tackle or have been proven wrong about, they now act as though those problems all came into being in November 2006.

Given that we live in a time when Luddites are honored as visionaries and hysterics treated as reasonable, I hesitate to point out that nuclear power has to be considered as one of our power options. Recently, France had some trouble with its nuclear power plants in general, as well as some recent crises, but with power generation, this is to be expected. Unlike this country, where most of the plants were built with different design plans, France used two basic designs. Thus, engineers who are walking into a plant for the first time are familiar with its workings, and a problem solved at one plant can be applied across the country.

There are those who regard nuclear power as inherently evil and dangerous, but given the world the way it is, power is necessary, and all sources need to be considered.

On a similar and similarly sacrosanct subject: Since Gregor Mendel's work in the late 19th century (and with its influence spreading in the early 20th), there has been genetic engineering of crops. It used to be done by hand, of course, though now international corporations are doing it with chemicals on a much vaster scale. Certainly, some of the hybrids might be dangerous, but a lot of them might not be.

I have to say, nothing quite warms the heart like seeing angry American protesters denouncing Monsanto and the other companies involved, so certain of the truth that they are demanding that research and development be stopped now. One would have thought U.S. paternalism toward the Third World might have eased a bit, but obviously these righteous folks know what is best: They seem to be willing to sacrifice the health and well-being of many peoples in the name of organic sanity and against corporate genetic engineering.

Finally, I must admit that I despair over the continued reaction of bicyclists to Stephen Moser's column. Making a joke about bicyclists is not the same as yelling "fire" in a crowded theatre. That many bicyclists have seen their fellows crippled and killed is tragic, but the personal should not be used as a public standard for what topics are inappropriate in public discourse.

Given very similar dynamics but radically different topics, I'm willing to bet that almost everyone who came out in favor of censoring or firing Moser at one time or another has been shocked because some group whose ideology they don't share (or actively oppose) has demanded a voice be silenced, that someone be fired or censored, because of what he or she has said or written. They are outraged because they don't share the same prejudices. Maybe these bicycling advocates are not offended by homosexuality, sexuality, radical politics, anti-religious fervor, or other topics that have drawn the threat of censorship. But the issue is not the topic; the issue is that censorship should never be an easy and convenient tool for silencing what other people feel shouldn't be said.

Censorship is censorship. Words are words, and actions are actions. An attack on speech (I'm not citing the Bill of Rights here but the sane, natural laws of a free society) is unacceptable except under the most extreme circumstances – and, even given those, decisions should be deeply debated and not casually accepted.

Pretending that what Moser wrote was inciting people to violence or creating danger for bicyclists is absurd. Even if they feel so threatened, engaging in outrage, discussion, and debate are readily available responses. But by coyly claiming the words themselves are dangerous, that death is not an appropriate subject for humor, that Moser should be censored or fired is to demand a precedent the consequences of which none of us would like to see. 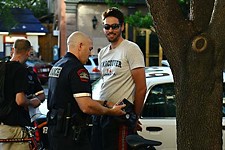