Your Style Avatar deems it OK to go without the NYC scarves for the summer, and it's hard not to remember a guy whose art is all over you 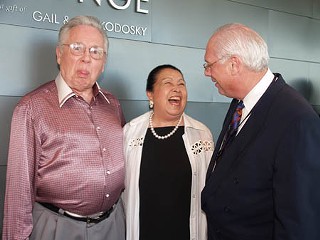 Joe R. and Teresa Lozano Long (l and c) share a moment of humor with Cliff Redd at the Catalyst Eight benefit for the Long Center. (Photo by Seabrook Jones/www.juicythis.com)

SO LONG, FAREWELL I paid a fitting tribute to the late Yves Saint Laurent the other day: I finally threw out the YSL sheets and towels that I bought in 1982. They were from YSL's Opium collection, and the sheets matched the packaging of the fragrance: Chinese lacquer red with black and gold metallic stripes of bamboo on them. The towels were black with borders of metallic gold and silver. I thought I was the damn Queen of Sheba using those linens. Just the experience of going to Frederick & Nelson in Seattle was fun – gone now, but one of the last bastions of bygone retail elegance. When I saw Frederick's YSL display, I remember wanting those sheets and towels more than anything on earth. They made my heart flutter, and I knew I'd never sleep well again until I got those sheets. Get them I did, and for 26 years, I loved them, even when the pattern on the sheets had grown faint and the towels had faded to purple. But that's really not so weird, is it? YSL has always been timeless.

FAD-ULOUS Did you see the photo layout in The New York Times' UrbanEye newsletter about how women in New York are sprucing up their minimal summer outfits with scarves – wide scarves, skinny scarves, knitted scarves, chiffon scarves, double-twisted scarves – worn as mufflers, wraps, ascots, babushkas, and shawls? This is in New York City. Today. Now. In the middle of summer. But here in Austin, we'll be branded as unfashionable because we don't snap up this trend. Oh, yes, the look is charming, but in NYC this morning, it was 69 degrees. In Austin, it was 1,000 degrees. We can't be slaves to every new trend, can we?

RAT-A-TAT TAT Unfortunately I did not get to view the documentary Hori Smoku Sailor Jerry (www.myspace.com/horismokumovie) during South by Southwest Film. They did send my sister a DVD of the film directed by Erich Weiss, however, and we watched it privately. Which was a good thing because it contained quite a bit of footage and interview with Rollo Banks, aka Michael Malone, the world-famous tattoo artist who just happened to be married to my (newly single!) sister, Margaret, making him my husband-in-law. The film is a tribute to Sailor Jerry, the Honolulu-based tattoo artist whose classic World War II style has become the tattoo standard. You see this style everywhere. Ed Hardy (we knew him as Don Ed Hardy back then) was Sailor Jerry's other best disciple. Between Rollo and Hardy (and notables like Kandi Everett and Keith Underwood), tattooing was saved from a fate of fine-line mediocrity and restored to its pinup glory. It was hard for us to watch Hori Smoku when Rollo was onscreen; the foreknowledge that he'd be dead by his own hand within the year is overwhelmingly sad. Even after they divorced, he and my sister remained extremely close, and she was editing his stories at the time of his death. And Rollo marked me indelibly, inside and out. I proudly bear tattoos on either arm from him; we were roommates during one strange Odd Couple phase and were great friends, as well as brothers-in-law. Every time I see Ed Hardy's name inked on a shirt on the back of someone like Bret Michaels, I want to put out a line of shirts for big boys called Rollo. My sister wants to put out a line of shirts for big girls called Kandi, but frankly, she's better off sticking to the Music Awards and lolling around backstages. The Alamo Ritz brings Hori Smoku Sailor Jerry to the screen this Friday and Saturday night at midnight.

DISHEEE I read that the Tiny Troll known as Mary-Kate Olsen has refused to cooperate with federal investigators who are delving into the mystery behind Heath Ledger's death. As we know, MK's bodyguards arrived at the same time the police did at the apartment in which Ledger's body was found dead of a multidrug overdose. And now, TT has demanded immunity from prosecution in exchange for her testimony. Naturally I was squealing with delight as I read this aloud to my mother. I always love good schadenfreude, don't you? Then my mother asked, "Do I, as a private citizen, have the right to refuse to cooperate with a federal investigation?" The celebrity double standard has always been puzzling; look at the spate of celebrity DUIs recently in which they all get sent to Slap-on-the-Wrist Prison, a fictional place where the worst thing celebs have to do is their own laundry. I especially love it when celebs get to send someone else in their place or simply not show up at all (hello, Britney!). But then again, if I were involved in something as serious as TT is, then I'd want immunity, too.