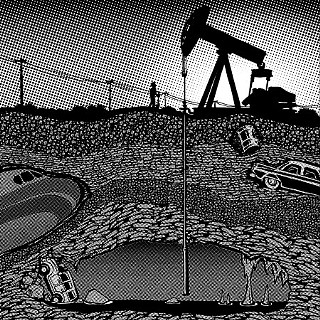 On April 29, 2005, this column ran with the headline, "$4 a Gallon." The opening paragraph went, in part: "America is like Wiley Coyote after he's run out a few paces past the edge of the cliff – he'll take a few more steps in midair before he looks down. Then, when he sees that there's nothing under him, he'll fall." I wrongly predicted $4 a gallon gasoline by the spring of '06, underestimating (as I often have) the perhaps admirable capacity of society to chug on "normally," no matter what, for as long as humanly possible – a capacity enabled by our financial community creating credit and buying power out of thin air. But easy credit ended last summer. Since then, credit in general has dried up, and our financial entities are shell-shocked. "After a Rough Year, Nearly Half of Wall St. Bank Profits Are Gone," headlined The New York Times on June 16 (p.C1), a week after the national average for regular gas hit $4 a gallon.

On Oct. 14, 2005, in a column titled "Things to Come: Part 2," I predicted that oil would soon hit $100 a barrel and that it would cost $100-plus to fill many vehicles' tanks. Readers accused me of "nonsense," one faulting my math and my "poorly thought-out, barely researched ... apocalyptic tripe." (Yes, I saved that letter.) I thought $100 a barrel would happen much sooner, but as I write, oil is $140, hovering between $135 and $145 this last month. Some predict worse, and they're not low-rent predictors. On March 10, CNBC's Street Signs reported that Goldman Sachs' analysts "see oil prices as high as $200 a barrel." On July 8, Texas oilman T. Boone Pickens told BBC World News America, "I think you could see $200 a barrel next year."

Take that in, then continue reading: "In March, Americans drove 11 billion fewer miles on public roads than in the same month the previous year ... the sharpest one-month drop since the Federal Highway Administration began keeping records in 1942." Yet oil goes up even as American consumption goes down. Once, that would have been impossible. Now, the U.S. demand no longer determines price, because 1,000 new cars a day hit the road in Beijing (NBC Nightly News, June 22). "Emerging economies now account for more than half of global growth" (The Economist, July 5, p.13). For the last five years, 40% of global oil demand has come from India and China (ABC World News, March 15, 2005). The International Energy Agency reported that "by 2013, oil demand in developing countries will account for nearly 49 percent of total global demand," with China alone responsible for "almost a third," and "decline in oil demand in the industrialized countries [like the U.S.] will be more than offset by [this] estimated increase in demand" (The New York Times, July 2, p.C4). That is why oilmen like T. Boone Pickens and the analysts at Goldman Sachs predict the price of oil will inexorably rise.

Politicians and professional ranters blame speculators, but that IEA report "discounted the impact of speculation." If you have the patience to read a lengthy article demonstrating why speculation is a tiny factor of the rising price of oil, try "Double, Double, Oil and Trouble," The Economist, May 31, p.73. As much fun as it is to blame speculators and oil companies, and as certain as it is that some reforms would help, nevertheless the culprit is global demand, about which there is nothing we can do.

George W. Bush, John McCain, and many others are calling for more drilling offshore and in Alaska. But "a recent study by the government's Energy Information Administration estimated that, under the best-case scenario, opening up the Arctic National Wildlife Refuge would reduce prices by $1.44 a barrel by 2027. Drilling in broader swaths off the continental United States wouldn't affect prices until 2030" (The New York Times, July 6, p.BU1). Our oil companies have admitted as much. From USA Today, Oct. 25, 2004, p.17, under the headline "Energy Independence May Be a Pipe Dream": "Simply put, many energy executives don't believe America can free itself from dependence on foreign oil. 'We do not have the resource base to be energy independent,' ExxonMobil Corp. chairman Lee Raymond said in a recent speech. 'We simply cannot avoid significant reliance on oil and gas from the Middle East.'"

From 2005's "$4 a Gallon": "We may hobble along with more or less the same way of life for the next dollar or so of hikes, but at $4 America changes. Drastically. The 'exburbs' and the rural poor will feel it first and hardest ... interest rates [I should have specified credit card interest rates] and inflation will rise, while ... property values plummet. Urban real estate will go up, so [workers] won't be able to live near their jobs. ... In the desert cities, real estate will plunge ... [In 2008, Nevada and Arizona have the first and third worst housing crises, respectively.] ... real estate values [in general] will depend on nearness to working centers and access to transportation. ... Places with decent rail service will be prime. Places without rail service will be in deep trouble." In "Things to Come: Part 2," I also predicted that air travel would be hit hard. Both articles predicted a new reliance on rail. From "$4 a Gallon": "[W]e're not talking about the far future. We're talking the next decade."

Some recent news, almost at random:

"Fuel Prices Shift Math for Life in Far Suburbs": "More than three-fourths of prospective home buyers are now more inclined to live in an urban area because of fuel prices" (The New York Times, June 25, p.18). "Schools Cutting Bus Service Because of Fuel Prices": "Schools are making more students walk to school and axing buses for extracurricular activities, and more operate on four-day weeks" (USA Today, July 10, p.3). "A survey commissioned by Discover Financial Services found that 62 percent of respondents are changing their holiday plans because of the higher gas prices, while 15 percent canceled vacations" (The Wall Street Journal, July 10, p.A3). "Rural U.S. Takes Worst Hit as Gas Tops $4 Average" (The New York Times, June 9, p.1). "High gas prices threaten to shut down rural towns" (USA Today, July 2, p.1). "In some rural areas, where people must drive long distances, and a pickup is more of a necessity than a lifestyle choice, filling up the tank can eat up nearly 15 percent of a worker's take-home income" (The New York Times, June 17, p.20). "Travelers Face Deep Flight Cuts by Summer's End": "[Jet fuel prices] have climbed more than 80 percent in the last year ... [ticket prices] may rise as much as 40 percent within the next four years. ... By year's end, roughly 100 communities will be left without regular commercial air service, and that number may double next year" (The New York Times, June 28, p.1). "Air France Weighing High-Speed Rail Service" and "is looking into replacing some of its short-haul European flights ... in partnership with a French train operator" (The New York Times, July 5, p.C2). "Ridership on Mass Transit Breaks Records" (USA Today, June 2, p.1). "Travelers Shift to Rail as Cost of Fuel Rises": "But the railroad, and its suppliers, have shrunk so much, largely because of financial constraints, that they would have difficulty growing quickly to meet [further] demand" (The New York Times, June 21, p.1). "Budget constraints are causing states and cities to reduce rail and bus services. A survey of the nation's public transit agencies released last month showed that 21 percent of rail operators and 19 percent of bus operators are cutting service"; this while "retail, restaurant, hospital and hotel employees who work in upscale cities often must look 30 to 50 miles from their jobs for affordable housing" (The New York Times, June 29, p.WK11). "As Gas Prices Soar, Elderly Face Cuts in Aid," and Meals on Wheels is having an especially hard time (The New York Times, July 5, p.1). "Rising costs for fuel, food and labor are causing school cafeterias to raise prices" (USA Today, July 9, p.6D); the article notes that, nationwide, meat and meat alternatives are up 11%, fruit and vegetables up 13%, bread 17%, and milk 19% – due to biofuel corn and diesel use. What will happen at $200 a barrel?

On June 1, screaming about "soaring" food and gas prices, The San Fernando Valley Daily News headlined, "Enough Already!" But changes are just beginning, deeper than a mere recession, or even a depression. This is a societal shift of grand dimensions. Can you hold tight and stay loose at the same time? 'Cause everything's about to change.