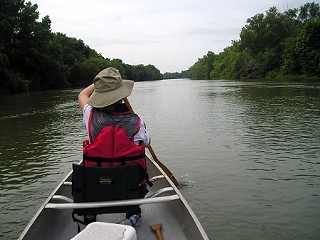 Paddling the Colorado River from Little Webberville Park to Big Webberville Park in eastern Travis County is about as easy of a canoe or kayaking trip as you can imagine. The six-mile trek also gives you a peek at the state of the river below Austin.

Downstream from the Highland Lakes, the Colorado River is a wide ribbon meandering through the Blackland Prairie. The channel is lined with a thick riparian forest dotted with makeshift fishing camps. A blue heron spread its large wings and played hopscotch with us as we rode the current until it disappeared around a bend. Two red-tailed hawks watched the river from the highest branches of two ancient cypress trees. One squawked its disapproval of our intrusion.

On the Sunday morning of the July Fourth weekend, our little flotilla had the river to itself, along with the bright-red cardinals that dashed in and out of the trees. We started at Little Webberville Park, a small spit of land off Water Street in the center of the village of Webberville, about 15 miles east of Austin on FM 969. The county park has picnic tables, a playscape, and a paved boat ramp down the muddy bank.

Next door to the park, Cook's Canoes (512/276-7767) rents canoes and kayaks and provides shuttle services. From here it is about six miles to Big Webberville Park, 15 miles to the FM 969 bridge at Utley, and 30 miles to Bastrop Fisherman's Park. A leisurely pace will take you about two miles per hour, depending upon the amount of water being released from Longhorn Dam at Lady Bird Lake. We made the trip in about 90 minutes.

Big Webberville Park is about five times as big as Little Webberville, including the soccer fields. In an old pecan grove, the county park has pavilions, picnic tables, a volleyball court, and a fenced-in horseshoe pitching pit. I've seen this park packed on Saturday afternoons, but as we pulled the canoe up the boat ramp on Sunday morning, only the soccer fields were being utilized.

The stretch of the Colorado River from Little to Big Webberville parks may not be the most scenic or exciting canoe trip, but it is a very pleasant journey. The fishing is good, and the scenery is largely unspoiled: Who could ask for anything more on a Sunday morning paddling trip?

For an explanation of why people purposefully leave their warm beds to explore river channels, pick up Wayne McAlister's fine new book, Paddling the Guadalupe (Texas A&M University Press, $24.95). Since 1965, McAlister has made hundreds of runs along the 431 miles of one of the most beautiful and popular rivers in the state, from its headwaters outside of Hunt to its mouth at San Antonio Bay.

A biology teacher by trade, McAlister has kept a journal of all his trips except the first one. And who can ever forget their first experience on the river? He and his wife, Martha, celebrated their 25th wedding anniversary by paddling the entire river during a three-week trip. Few people know or love the Guadalupe as much as McAlister.

The book is a nice mixture of personal canoeing experiences and river lore intermingled with a biology teacher's lessons. As McAlister modestly points out, few have summed it up better than Ann Zwinger when she wrote, "With the first paddle stroke I feel like a tethered balloon whose rope has been cut."

While I'm on the subject of Texas rivers, I can't help but mention Andrew Sansom's new book, Water in Texas, an Introduction (University of Texas Press, $19.95). While this book might contain more technical information than the average reader would want, if you enjoy Texas lakes and rivers, then you need to pick up a copy.

Sansom, the executive director of the River Systems Institute at Texas State University and former executive director of the Texas Parks & Wildlife Department and the Nature Conservancy in Texas, gives the reader an overview of Texas water laws, nature's water laws, and the future of water in the state. If water is the new oil, then we all need to familiarize ourselves with the issues affecting this public resource before it's too late.