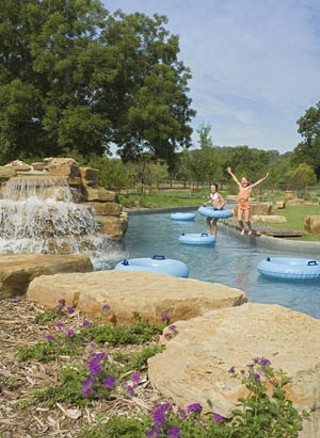 It was a spur-of-the-moment decision to check into the Hyatt Regency Lost Pines Resort and Spa, near Bastrop. I just needed to get away from everything last week; the North Pole wouldn't have been too far. The allure of driving only 40 minutes to be away from it all was irresistible, so my sister Margaret and I made reservations, packed our bags, and hit the road. We arrived around 9pm – a mere two hours after we'd made the reservation – just to be told that the room we'd reserved was no longer available.

"But, but ... we just made the reservation two hours ago!"

"I'm sorry," replied the lovely young automaton-in-training, "We just don't have a room with two beds available. Perhaps a king-sized bed and a roll-away will do?" "Ma'am," I said respectfully, "I am not paying nearly $500 a night to sleep on a roll-away bed." Suspicious that we were dealing with a trainee, we asked for the manager, who came out, reviewed the situation, and offered us each our own room with a king-sized bed. Done deal. Ensconced in our rooms, Margaret and I joined up and ordered room service – not bad at all, even if the room service prices were typically astronomical, but all across the board, the staff was pleasant, helpful, and friendly. Not always accurate, we came to learn, but pleasant, helpful, and friendly, nonetheless. We took a late-night stroll around the grounds: a lavish spread with a separate spa, golf course, hike-and-bike trails, horseback riding, ponds, and virtually every other amenity. We ended the stroll with a rest in a double hammock, watching the impossibly large stars scattered across the sky. But it wasn't until the light of day, when we awoke, that we realized just how family-oriented the Lost Pines Resort is. Children were everywhere: children shrieking in the pool, children shrieking on the lawn, children shrieking in the hallways. Thousands of children, it seemed like, and I began to regret that we hadn't more carefully considered our choice of getaway. I began to think that we'd checked into Romper Room instead of a lush resort. I can remember when the name Hyatt was like the name Hilton: Both conjured up luxurious, pristine, first-rate accommodations, but now, both seem to have dumbed themselves down to cater to a lower common denominator. My best suggestion would be for resorts like these to also provide a more sophisticated, adults-only wing. Be that as it may, I had four hours of relaxing body treatments to look forward to, and boy howdy, was I ready for that! Indeed, stepping into Spa Django was like entering another world. The graciously appointed space enticed with fragrant vistas and softly inviting privacy. My masseuse, Rachael, had the hands of an angel, and I virtually slept through that, the mud wrap, and the reflexology, awakening to quiet and gentle words telling me my session was over. I then availed myself of the sauna, steam room, private spa-only pool, and the shower that sprays from all sides, as well as trying all the free amenities such as razors, shaving cream, aftershave, toothbrush, toothpaste, combs ... they even let me keep my spa slippers, a pair of stylish black slides with a clear smoke-colored instep that I'll wear until they disintegrate.

Dinner at Shellers Barrelhouse Bar was just fine, except that Margaret kept ordering delicious but laborious Brandy Alexanders that made our drink orders take forever. And of course Margaret knew the house band that was playing. Musically speaking, overall, the resort was very thoughtful about the music selection – not just Texas-oriented but very Austin-centric music throughout, on the phone while waiting for room service, in the hall, the lobby – Willie, of course, but also Shelley King, Lyle Lovett, Eliza Gilkyson, etc. Another big plus was that the grounds were relatively bug-free, except for the peculiar infestation of tiny flies in my room.

While we're back on the subject of rooms, a notable amenity is the portable, handheld magnifying mirrors. Margaret loved it for make-up (she could even carry it to a window for natural lighting), and I liked it for examining every single pore and wrinkle on my face. On the downside, the personal-care products provided in the rooms (by Portico, which is the same brand the Radisson uses, if that says anything) were so heavily scented with eucalyptus that you have to really love that fragrance to make it bearable. Eucalyptus is an acquired taste, and I'd recommend something more generally appealing. But the beds and bedding were faaabulous – like sleeping on clouds ... and I slept a lot. More spa services made the days delightful, but I refused to enter into the mini-Schlitterbahn-like pool, fearing that it was at least 75% kiddie urine. But once the land was dark and quiet, Margaret and I hopped the fence, grabbed some inner tubes and floated in the moonlight to our hearts' content. Or at least until the first beam of the security guard's flashlight hit my face. "Pool closes at 10!" spoke the voice behind the beam. "So sorry," I said, "we had no idea." The guard was pleasant – even funny. He gave us towels and Margaret said sheepishly, "I guess this isn't the first time you've caught people swimming after hours." "No, ma'am," the guard drawled, "but at least y'all had your britches on."