A visit with Van and a send-off for Cyd. 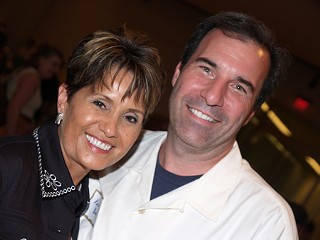 COTTON PICKIN' I went on a date with my old friend David Cotton a couple of weeks ago. Well, it wasn't really a "date" since he didn't arrive with a corsage, so we'll just consider it an unholy alliance. He took me to see Eddie Izzard at the Paramount. David had seen the show the night before and said it was brilliant. I first saw Eddie when he was doing his tranny routine, and he was hysterical, but this show was nothing like that. In fact, David said it was a completely different show from the night before. It seemed a bit disjointed at times, but on the other hand, I had the distinct feeling that we were seeing magic produced before our very eyes. Izzard is such a brilliant, elegant performer that he could be reading the alphabet, and I'd love it. Afterward, Mr. Cotton and I dropped into the Van Wilks benefit at Antone's. Van and I date back to 1976, when he threw a huge Mardi Gras extravaganza at the Armadillo World Headquarters. I appeared as a nurse from outer space, Micael Priest was dolled up as a starlet (courtesy of me) in a red sequin gown and auburn showgirl wig, and my sister, Margaret, was dressed as a Mardi Gras fairy. Van and I share something else in common – prostate cancer. Here's to you, Van, for all the years of entertainment.

R.I.P. CYD CHARISSE What a dame and a great lady – not to mention one of the most dazzling dancers ever captured on the silver screen. Born Tula Ellice Finklea in Amarillo in 1922, she overcame a bout of polio and went on to a screen career that left a legacy that included of some of the most classic Hollywood musicals of all time. Charisse was breathtaking with Gene Kelly in the sizzling "Broadway Melody Ballet" sequence from Singin' in the Rain and sublime with Fred Astaire in the "Girl Hunt Ballet" routine from The Band Wagon. I became somewhat of a Cyd Charisse scholar while researching her films to compile a tribute to her for the Austin Film Society's fabulous fundraiser, Texas Film Hall of Fame, in 2002. Of all the many legends the Hall of Fame has honored, Charisse was one of the few links to the golden days of the MGM hit-making machine ("More stars than there are in heaven," they said). I worked diligently to make sure that this tribute, out of all the Hall of Fame tributes I've done, was something special. I truly wanted to honor Charisse, and since she'd be there, I'd desperately wanted to please her, too. I was in a dither when AFS Executive Director Rebecca Campbell invited me to an intimate dinner with Charisse the night before the awards. Trying to be gracious and solicitous since she was sitting directly across from me, I asked her if there were any local shopping needs she might have for the next day, or if perhaps she needed to get her hair done. Her personal assistant, Bruce, turned to me with a frozen smile and said, "I am Miss Charisse's assistant and hairdresser." Having met Charisse the night before the awards, I visited with her backstage, and I alerted her to when her tribute was being shown. She whispered, "Come with me," and we walked to where we could see the big screen. As the sequence of clips built in intensity, Charisse slid her hand into mine, occasionally clutching very tightly when there was an important screen moment. When it was over, she leaned forward and said, "Oh, thank you so much," then she gave me a quick peck on the cheek and sailed onto the stage to accept her award, disappearing under the lights like a vision in the night. God bless you, Cyd.