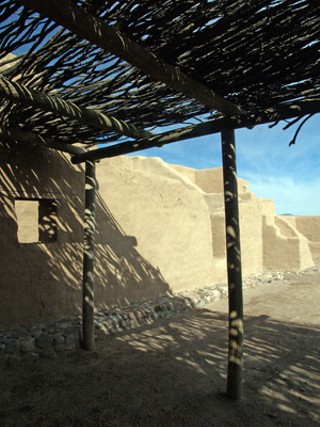 Fort Leaton State Historic Site outside of Presidio, Texas, stands as a stark reminder of the rugged life of the pioneers on the Texas frontier 150 years ago. The restored adobe walls of the fort look out over the Rio Grande Valley, which has changed only subtly since Comanche raiders and Mexican traders forded the river at the Chihuahua Trail crossing.

The fertile plains at the junction of the Rio Conchos (from the Mexican side) with the Rio Grande are some of the oldest continuously cultivated farmlands in the United States. Evidence suggests that Native Americans lived in the area as early as 1500BC.

On the trade route between Chihuahua, Mexico, and the Spanish colony at Santa Fe, N.M., the site was settled by the Spaniards in 1760. The garrison at the river crossing became known as Presidio del Norte and eventually just Presidio.

With pressure from the Southern Plains tribes, the Apaches moved into Northern Mexico and the mountainous Big Bend region, displacing and absorbing established tribes. This only attracted more Comanche war parties looking for captives and horses. Unable to control either tribe, the Mexican government offered bounties for Indian scalps.

Very little is known about Ben Leaton before he arrived at the West Texas river crossing other than he came to the area to collect the bounties and worked as a freighter hauling goods between Chihuahua and San Antonio. His arrival coincided with the opening of the territory after the Mexican-American War.

When Leaton bought the site of his home and trading post, the Comanche Nation was the most powerful economic force in Texas. Their domain stretched from Kansas to the Rio Grande. In order to fuel their trading economy, the Comanches relied on pillaging Northern Mexico to supplement their herds of horses and captive work force.

Leaton knew he would get first choice of captured horses, mules, and slaves by setting up shop at one of the major river crossings. He traded manufactured goods, sugar, tobacco, guns, and ammunition for the spoils of the raiding parties.

Except for stories handed down over generations, most of Leaton's business dealings are shrouded in mystery. One legend says that he once entertained several Indian chiefs (probably Apaches) at his home. When he awoke the next morning, his guests had made off with all of his horses and mules. Sometime later, he invited the same chiefs to dine with him again. During the meal he swung open the doors to reveal a cannon pointed into the room. Those that survived the initial blast were cut down by sharpshooters.

Leaton's enterprise lasted only three years before he died, possibly of yellow fever, on a trip to San Antonio. His widow quickly married Ed Hall, an Irish immigrant. By all accounts, Hall was a very nice person but a poor businessman. He became overwhelmed by his wife's debts and bad loans of his own doing. When he failed to make good or to vacate the property, he was shot in the back as he ate his evening meal.

Many historians suspect that the murderers were paid by John Burgess, Leaton's former partner and holder of the mortgage on the fort. With the death of her second husband, Mrs. Leaton-Hall was easily evicted from the house. Thirteen years later, Leaton's son avenged the death of his stepfather by killing Burgess.

The Burgess family remained in the fort until 1926. After a series of owners, the property was donated to the state Parks Department in 1967. Extensive restoration returned it to its appearance of a hundred years before. It opened to the public in 1978.

Fort Leaton State Historic Site is a window into the past. Many of the rooms illustrate how residents might have lived in this self-contained village. A small museum explains the settlement of the river valley and the area's natural history. Admission is $3 to the park four miles southeast of Presidio on FM 170. Often just called River Road, FM 170 follows the Rio Grande from Presidio to Lajitas and is one of the most beautiful drives in Texas. Don't miss a chance to enjoy the spectacular vistas.