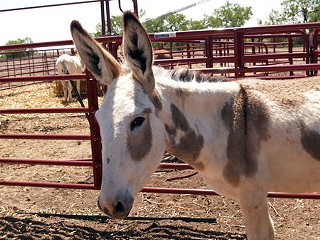 Texas Burro Rescue began with a bang. When employees of Big Bend Ranch State Park began thinning the herds of wild burros in the park with a rifle, the neighbors got upset. Peaceful Valley Donkey Rescue of Tehachapi, Calif., came to the rescue.

Sterry Butcher eloquently reported about the plight of the burros in a series of articles for The Big Bend Sentinel in Marfa. According to Butcher, and not disputed by the state Parks Department, two employees disposed of 71 burros in the park during a 12-month period. By October 2007, the park manager and a ranger left the department in disgust over the killings. The public outcry caused the park administration in Austin to rethink the official policy on eradicating the long-eared animals.

The problem is that wild burros and aoudads, or Barbary sheep, are considered exotic guests to the former cattle ranch that have overstayed their welcome. In the fragile desert environment, the interlopers compete with the desert bighorn sheep that the department is planning to reintroduce to the park. With no budget for capturing the burros, a slug was the most expedient way of removing the feral animals.

Enter Mark Meyers and his donkey-rescue program. Peaceful Valley Donkey Rescue is the largest private group working with state and federal agencies to reduce burro populations in Western states. The organization operates five adoption centers, including one being constructed in Miles between Ballinger and San Angelo.

This isn't Meyers' first rodeo. Working with Mike Hill, regional director for Texas Parks & Wildlife, he devised a plan for humanely removing burros from Big Bend Ranch State Park. No one knows exactly how many burros are in the park, but estimates range from 200 to 400.

"We've got our work cut out for us," Meyers says. "Burros have been in that area for 400-plus years. They're pretty well established." The biggest problem is the unending supply of animals wading across the Rio Grande from Mexico. Drug smugglers even use wild burros as easily trained couriers before abandoning them in Texas.

Small groups of burros are captured in the park, quarantined, and checked by a veterinarian. Sick burros are euthanized; healthy ones are moved to the adoption centers. At the centers, trained volunteers begin the gentling process.

"They're like big puppies," says Jan Blumentritt, manager of the Odessa adoption center. Blumentritt was involved in dog-rescue organizations for 20 years until she got her first donkey. Last summer, before news came out about the Big Bend Ranch shootings, she helped Meyers form the Texas Burro Rescue branch of Peaceful Valley Donkey Rescue.

Blumentritt explains that the animals are descendants from the African wild ass brought to the New World by the Spanish. Females are jennies and males are jacks. They come in three basic sizes – miniature, standard, and mammoth – and a variety of colors. "Most are naturally curious, friendly, and calm," she says. "It all depends on the kind of previous interaction they've had with humans."

Meyers says "wild burros" is a very loose term. Some of the captured animals are domesticated donkeys that were turned loose or escaped. Wild burros are sometimes used for roping practice by cowboys. "We would never place anything too wild," he says. "We want people to enjoy the animals."

The animals have very individual personalities, Meyers says. He had one burro captured in Nevada that had never seen a human before. It was ready for adoption in a week. Other burros are so traumatized by their previous encounters with humans that they never become adoptable. "A donkey may forgive," Meyers says. "But it never forgets."

Peaceful Valley Donkey Rescue is working to open an education center in Miles sometime this year. Be sure to bring a bag of carrots if you go to see the donkeys. Appointments can be made by calling 325/468-4123. You can help in other ways by becoming a volunteer donkey trainer, providing a foster home, adopting a donkey, or giving a cash donation. This fall, Meyers will need volunteers for a roundup of wild burros at Big Bend Ranch State Park. For more information, go to www.donkeyrescue.org.