At the pick-your-own Blueberry Palace outside Nacogdoches, it's one in the bucket and one in your mouth 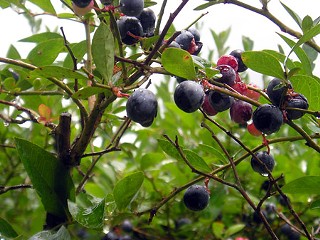 The Blueberry Place outside Nacogdoches doesn't have blueberry bushes; it has blueberry trees. And this is shaping up to be a very good year for East Texas pick-your-own blueberries.

"We've got lots of fruit on the branches," says Sherrie Randall. "We're just waiting for it to get ripe." She plans on hanging the open sign next to the mailbox beginning June 1.

The reason that the Randalls' fruit is on such stout stock is because the bushes were planted almost 25 years ago. "It's the soil that makes Nacogdoches blueberries some of the best," she says. If the growers can get the right combination of sunny days and rains, then the little blue orbs can grow as big as marbles. "This year has been a real blessing" because they have gotten just about the perfect mixture of sun and clouds, she says.

When the previous owner started the orchard, she picked three varieties of blueberries that thrive in the Piney Woods around Nacogdoches. With the acidic soil under a layer of pine needles, all she had to do was add some sand for better drainage. The result is 1,100 plants that only need an occasional shot of fertilizer.

"People seem to appreciate that we don't use any chemicals on our bushes," Sherrie says. They also choose not to sell their berries in grocery stores. "We're strictly pick-your-own," she says. And pickers come from Houston, San Antonio, and Fort Worth to get the berries fresh off the bush.

Sherrie Randall and her husband, Roger, didn't intend to become farmers when they retired to the property a little less than 10 years ago. He wanted the barn for a wood shop; she liked the space for gardening. Even though it's in a subdivision, their 10-acre lot is surprisingly secluded.

"When we bought the place, we were going to take the bushes out," Sherrie says. But one morning during the first week that they were in the house, they looked out their bedroom window to see a dozen people picking berries. It was the local Kiwanis Club getting fruit for their pancake breakfast. That weekend, the doorbell kept ringing from people wanting to pick berries.

"We thought it couldn't be all that bad owning a blueberry farm," Sherrie says. That was before they found out that maintaining the bushes was nearly a year-round job. Besides mowing and pulling weeds, the bushes have to be topped out once a year. "You want to keep them at 6 feet, or you won't be able to reach the berries," she says.

The couple takes a pretty relaxed attitude about harvesting the fruit. Most days they use a basket on the porch and the honor system to collect the $1.25 per pound for the berries. It used to be that they had berries into August, but now they're usually picked out by the Fourth of July.

One of the coolest things about picking blueberries at the Randalls' farm is that you get to use a bucket harness. It looks like a pair of suspenders worn backward with a hook for your bucket. This way, you have both hands free to pull the berries off the bush.

When the Randalls bought the house, they found an old leather bucket-harness in the garage. Roger bought some festive-colored nylon webbing, and Sherrie followed the pattern to make additional harnesses.

When a group from a local nursery scheduled a visit, Sherrie stayed up late sewing 20 extra-small harnesses. "The little kids love to come out and pick berries," she says. "It's one in the bucket and one in your mouth. That's what picking berries is all about."

The Blueberry Place is about three miles north of Nacogdoches off FM 1878 in Carrizo Creek Estates. The Randalls can be reached at 936/559-9157 or at www.theblueberryplace.net. They will also be the featured orchard during Nacogdoches' Texas Blueberry Festival held on the second weekend of June.