Tweet
print
write a letter
ONE IN A MILLION There is no way to truly thank Stephen's Angels, who hosted the Stephen's One in a Million fundraiser for me last Wednesday at Antone's, starring Ray Benson, Kathy Valentine, Bobby Whitlock & CoCo Carmel, Chip Taylor, Sara Hickman, and Ray Wylie Hubbard. So this is my tribute to them. 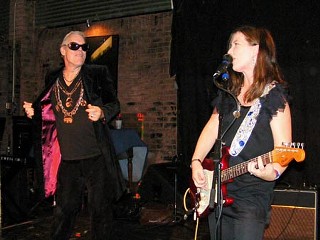 3 Balls of Fire played during the cocktail portion of the event, and Kathy Valentine of the Go-Go's opened the big show. Here I am go-go dancing to "Vacation," after Kathy presented me with a poster signed by all the Go-Go's. (Photo by Ron Baker) Backstage with Bobby Whitlock & CoCo Carmel after their performance of "My Life" written for me. (Photo by juicythis.com/seabrook jones)

Margaret and I weeping copious tears while my brother and mother take in Sara Hickman's performance of our favorite song, "To Sir, With Love." (Photo by Todd V. Wolfson)
More After a Fashion columns