Even Avatars need a nap now and again. 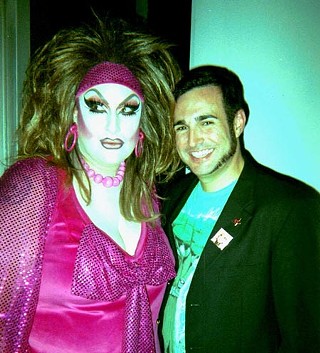 TAKE ME AWAY! It's just too much, sometimes. Yes, even I get burned out. This past week I laid low socially ... publicly, anyway. I just wanted a five-day Calgon bath to take me away. But of course, this season particularly, it seems like we're all in overdrive, doesn't it? I think we should all have a spa day together – you know, just you and me. We'll get pedicures and facials and girl-talk all day. Perhaps we can schedule that for, hmmm ... looks like my first opening is in July. Okay, well, I'll pencil you in. I did make it out Friday night. Friends brought a limo, and we shuttled from one party to another. I felt so, I don't know, so comfortable in a limo, like there should be one waiting for me 24/7. It's just not fair that Miley Cyrus has one and I don't. We went to see the Edward G. Vormann solo show at Gallerie Jean Moulin, a stylish space that showed off Vormann's many styles. In fact, the whole party was stylish, from the food to the charming French band that played in the corner. But it was, of course, Vormann's work that got the attention – dark, exotic, even dangerous women in brilliant color and deep shadows. He presents them in multiple styles. My entourage and I then swooped in on Pamela Des Barres' housewarming party for her good friend Jimmy Quills, who is a new resident of Austin in a faaabulous farmhouse that's so near yet seems so far out. Like Mme. Des Barres herself, whose relatively frequent jaunts to Austin may foretell a longer stay in the future. Afterhours was at my house – all hours, it seemed like. Slept a little, got up, took care of business, and laid down for a nap around 2pm. A nap which I awoke from at 5am Sunday morning, having stood up my glamorous new friend Jessica McMillen for the Jackie Beat show at the United States Art Authority. Damn, I wanted to see her ... them, I mean: Jessica and Jackie.

BEAUTY WITH A T When I went to the opening party of the original Beauty Bar in New York in 1995, I never dreamed it would have become a national chain uniting hipsters across the country. Well, it's been doing that in Austin for some time now, but now? You can wear that Beauty Bar through purchasing its men's and women's tops at the Beauty Bar itself as well as Goodie Two Shoes on the chic SoCo strip. Surround yourself with Beauty ... Bar, that is.

AGENDA Tonight, Thursday, May 15, 8pm at the Off Center, two of my favorite icons collide: Barbie and the one-woman-wonder known as Barbara Chisholm in When Something Wonderful Ends. Whatever these two dolls do is gonna be dynamite. The show runs through June 1. Go to www.rudemechs.com for tickets. Friday, May 16, at Vicci, at 9pm (8pm, VIP), Unreal Entertainment presents Stilo, a fashion show benefiting SafePlace, featuring local stores, salons, and make-up artists. Tickets available from Front Gate... Sorry, but you're out of luck if you waited to buy tickets for the Paramount Theatre's 92nd Anniversary Gala starring Kris Kristofferson. Theatre supporters and fans of Kris snapped them up looong ago... But! There are still a few tickets left for the Arthouse 5x7 Splurge – one of my all-time favorite recurring events. Go to www.arthousetexas.org, and order now... And if you're a ticketed passenger flying out of Austin-Bergstrom International Airport, you can see an exhibition called "The Hat," which is one woman's lifelong collection of fun and fancy chapeaux. From simple toques to extravagant confections, these hats cover a wide span of history. On display through July 1, in the pylon showcases located on the concourse between gates 7 and 12.