The Texas Skydiving Center in Lexington, Texas, is a good place to test your courage in thrilling fashion 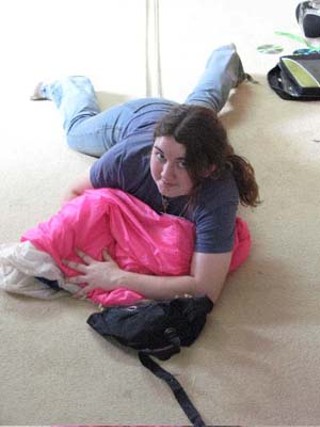 So I've made a promise to myself, but please don't hold me to it, because I reserve the right to break it. Sometime this summer, I am going to jump out of an airplane. An airborne airplane, I mean, with a parachute on my back. Or, at least, with a tandem jumpmaster on my back, who has a parachute on his back.

I don't care how ballsy you are: Going skydiving for the fist time is kind of a big deal. You're choosing to do something patently mad, and chances are, you probably have no clue why, except that it's supposed to be fun. "You're going to love it!" everyone says. "It's amazing! You have to do it!"

These people have no less an authority than the 18th century British philosopher Edmund Burke to back them up. "Whatever is fitted in any sort to excite the ideas of pain and danger ... or operates in a manner analogous to terror, is a source of the sublime," Burke wrote. Danger, he said, is delightful. Pain is pleasure. Somehow these masochistic play experiences restore us. They make us feel whole again.

"Stop thinking so much about it!" Stefka Dakijeva told me a couple of weeks ago. "Just do it!" A Bulgarian, she was in Texas for a conference, had a day off, decided to drive out to the Texas Skydiving Center in Lexington, about an hour east of Austin, and jump out of a plane. Just like that.

So had Austin's Andy Roddick, I'm told. Apparently, he had been there the day before. Somebody had given him a gift certificate. (Andy does pretty well for himself playing tennis, but evidently he hates to see a perfectly good gift certificate go to waste.)

I wish I were made more like the Stefka Dakijevas and Andy Roddicks of the world. On that day, I was filming a documentary, so my forking over the $150 for a tandem jump was off the table. At least that was my excuse – I had work to do! – and I'm sticking to it.

Still, for all my trepidation, my visit to the Texas Skydiving Center was reassuring. Oddly, it was Bre Hall who most emboldened me, not the self-possessed jumpmasters in their multicolored jumpsuits. Hall is the girl who packs the chutes. She's 16 and working on her GED. Given the gravity of the job, I would think a doctorate was required.

On second thought, I know people with doctorates. I'd sooner put my life in Hall's hands. Hall gets it. She understands my apprehensions. When she a little kid, she told me, some stuff happened, and trust has never come easily to her. That's why she is so intent on being so trustworthy herself.

I won't say that's all I needed to hear. I still have to screw up my courage. But when I finally do, it'll be me I'm worried about. Me crapping my pants. Not Hall.