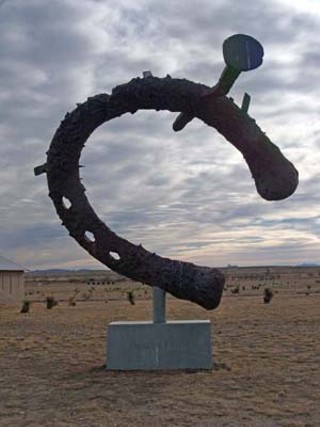 The Chinati Foundation's museum in Marfa is like no other art museum in Texas. The Big Bend sky and the desert landscape fading into the Chinati Mountains on the horizon are elements of the minimalist artwork.

Established in 1986 by artist Donald Judd, the museum displays his work as well as permanent and traveling exhibitions by a long list of other notable artists. The galleries are in former military buildings that utilize space and light in a way that few other art-exhibition houses can. The environment becomes a part of the overall experience.

Originally from Missouri, Judd attracted attention in the art world before he graduated from Columbia University. By his mid-40s, the sculptor, painter, and architect was planning his escape from the Big Apple. Touring the American Southwest looking for a place to relocate, Judd stumbled upon Marfa and moved there in 1972.

A little more than 60 miles from the Mexican border and nearly 200 miles from El Paso, Marfa has always been a bit isolated. Compared to the other parts of West Texas, the weather is remarkably mild here due to the town's location on a high plateau between mountain ranges. Rich in Hispanic culture accented with old ranching families, Marfa was a place satisfied with its own slow pace before the world came knocking at its door.

Home of the mysterious Marfa lights, the seat of Presidio County really got noticed when the film crew of Giant moved into the Hotel Paisano. A recluse from the New York art world didn't cause much of a stir in town, even when he began buying up vacant warehouses and office buildings in downtown for his home, studio, and galleries.

In 1979, Judd purchased the former U.S. Army base on the southern edge of town and turned it into a unique art space. Fort D.A. Russell opened as Camp Marfa in response to the Mexican Revolution in 1911. The fort served as a military training base until it was closed in 1933 but was regarrisoned in 1935. During World War II, the post saw its greatest activity with buildings added, trees planted, and infrastructure installed. The Army finally left for good in 1946, and by 1949, most of the land had been sold to individuals.

From the original structures, Judd took two former artillery sheds and remodeled them into galleries with lots of windows that illuminated 100 milled aluminum boxes. Some of the former barracks were turned into galleries for other artists and temporary exhibits. The cafeteria building was left as Judd found it, complete with a faded mural painted by the former prisoners of war at the camp.

According to my tour guide, Judd entertained many famous friends and artists in Marfa before he died in 1994. Claes Oldenburg and Coosje van Bruggen were two regulars. The couple began collaborating in 1971 on large outdoor sculptures when they installed a 41-foot trowel stuck in the ground in the Netherlands. They followed that with 11-foot billiard balls, 26-foot pliers and a 26-foot screwdriver, and four 17-foot shuttlecocks. You get the idea.

Oldenburg was wandering the grounds of the decommissioned fort when he came across a simple concrete headstone for Louie, "the last cavalry horse" in the U.S. Army. The artists thought the spirited and faithful mount deserved better. The 19-foot rusted and bent horseshoe with oversized bent nails that the couple built against the backdrop of the prairie captures the spirit of West Texas as well as any work of art.

The Chinati Foundation is open only for guided tours. Tours consist of about two miles of walking and begin at 10am and 2pm, Wednesday through Sunday. Admission is $10 for adults and $5 for students and seniors. Slots on the tours are limited, so make a reservation early at 432/729-4362 or at www.chinati.org.

The Judd Foundation maintains the artist's former home and galleries in downtown Marfa. Public tours of La Mansana de Chinati/The Block are offered Wednesday through Sunday at 4:30pm. Studio tours are on Friday at 2pm. Space is very limited on the tours and advance reservations are required. For information, call 432/729-4405 or go to www.juddfoundation.org.