Pitching Chico and Johnny Save the World 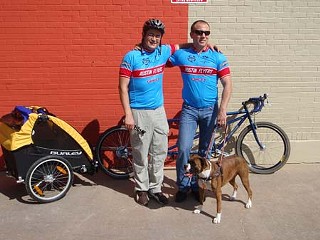 So everyone here at Dumbass Productions totally digs your proposal. Seriously, we're seeing another Dumb and Dumber or Bill & Ted's Excellent Adventure or Harold & Kumar. Hell, maybe another Thelma & Louise, minus the annoying feminism, or a Motorcycle Diaries, minus the annoying lepers. The thing is, though, we won't be able to green-light the project without some small changes. Hope you're cool with that.

First, your names: They need work. "Diego" is fine, but how about "Chico" instead? And what about "Johnny" instead of "John"? Chico and Johnny Save the World – now there's your title!

Second, the basic plotline: two guys and a Seeing-Eye dog, biking and swimming from Seattle to Key West. At the production meeting yesterday, we were all like, "Okaaaaaay." I mean, we're all down with the whole road-film concept, but the route you've settled on just seems totally arbitrary. So check this out: We're thinking Chico and Johnny travel to Mecca. Two dopey dreamers, one slightly overweight (Chico), the other legally blind (Johnny), making a pilgrimage to that bigass church they got over there – that could be some seriously funny shit. Johnny's Seeing-Eye dog, Rasha, could be the key to all this. Like, maybe the dog is Muslim.

Third, a brindle boxer isn't bad. But how about a Seeing-Eye Chihuahua? And what if Rasha were a talking Seeing-Eye Muslim Chihuahua, a member of some mujahedeen, always lecturing Chico and Johnny about their gross Western materialism while they're busy suckering people into bankrolling their pointless adventure?

Fourth, about that charity angle and all your dippy talk about proving "to all people, but especially children, that when you have a dream, no matter how crazy, if you take the right steps and work hard you can achieve the 'impossible.'" Honestly, guys? Our reaction was, "Yeah, whatever." Sure, there might be the pretense of giving to charity, but everyone will know it's bogus, that Chico and Johnny are just looking to have a good time on someone else's dime. And that's totally cool with us. But the bullshit philanthropy is still a little vague. What if they told people they were raising money for feline AIDS, pissing off their talking Muslim Chihuahua?

Maybe you're not totally down with the direction we want to take this. Maybe you're thinking that we haven't taken your proposal seriously. But is biking down the Pacific coast to the tip of the Baja peninsula, swimming across the Sea of Cortez, then getting back on your tandem bicycle, pedaling across Mexico to Cancun before swimming across the Gulf of Mexico in shark-infested waters, in hurricane season, and finishing the whole 4,000-mile journey in Key West, all in the name of supposedly raising some $375,000 for UNICEF – seriously, dudes, is that any less ludicrous?

Don't get me wrong, guys: Ludicrous works. We like ludicrous. That's the beauty of this baby. So go with it. Don't hold back. And don't forget to write!