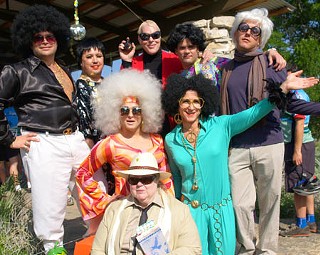 MONDAY Hangover day of rest after a hellish (but fabulous) weekend of philanthropy and debauchery.

TUESDAY I, along with our usual gaggle of fashionistas, judged the UT Apparel Design majors' senior projects, from the bold and the beautiful to the tired and the uninspired. We were inspired to give a prize for Most Belligerent to a particularly prickly student whose skin, in our opinion, is waaay too thin to be in the fashion business.

WEDNESDAY I'd avoided working up until this point but could no longer put it off. I dove into a pile of virtual messages, correspondence, press releases, and phone calls. Fortunately, dinnertime gave a lovely reprieve, and I had dinner with friends at Taste, the new restaurant on West Cesar Chavez. The verdict? Faaabulous.

THURSDAY Tragedy struck. I woke up late and discovered something funny in my mouth (no, it wasn't that). During the night, I'd lost the veneer on my front tooth and had apparently swallowed it, leaving this little brown nub of a tooth for all the world to see. I scrambled and frothed until I found someone who could see me on short notice. The Austin Dental Spa (www.austindentalspa.com) on Northland is incredible. From the sympathetic receptionist who took my panicky phone call and booked me immediately to the lovely decor to the amenities (including an herbal shoulder wrap and hand massage) to the handsome, funny, and smart dentist right out of Central Casting, Dr. Mark Sweeney, the experience was superior to any dental service I've ever had. However, I was running so late I missed the Umlauf Sculpture Garden Party, which is one of my favorite parties every year, but caught the end of the Fave magazine party and then hung at Estilo after their Spring Fashion Show. An exhausting schedule, yes? How do I do it all?

FRIDAY 10am, Pink Hair Salon for a styling appointment for a 1:30pm photo shoot. After a grueling session of posing and modeling (now I understand why Linda Evangelista said, "Christy and I don't get out of bed for less than $10,000 a day"), I had to rush home to figure out what to wear to the UT Fashion Show. I told you that the fashion business wasn't all glamour – and as Judy Garland once said, "You can't eat glamour for breakfast." The show was predictably lavish (it is the largest annual fashion show in town), but I can tell you that many of the things we judged on Tuesday looked very different on the runway.

SATURDAY Last week when my dear friend Mark Erwin asked me if I'd do him a favor, little did I know that it would involve putting on some kind of drag and making an appearance at the crack of dawn for the Hill Country Ride for AIDS. Mark was in charge of Pit Stop No. 1 for the ride, and our job was to entertain and provide refreshments for the riders. The theme was Studio 54, and we had an all-star lineup: Liza Minnelli, Andy Warhol, Elton John, Diana Ross, Truman Capote, Gloria Gaynor, a fat Liz Taylor, and assorted disco denizens. I appeared as Halston in black leather jeans, black cashmere turtleneck, red cashmere jacket, shades (of course), "cocaine" residue on my nostrils, and a vintage bottle of Halston Z-14. Well, it wasn't really drag since I'd worked variations of the outfit all through the holidays, but, well, it had been a busy week, and I hadn't had much time to prepare. We decked the place out with a multicolored dance floor, mirror balls, a Studio 54 sign, fur rugs, and other Seventies relics and welcomed the riders with blaring disco music, snacks, drinks, and an all-you-can-snort "cocaine" bar (OK, it was really just talcum powder, but after all, nothing says Studio 54 more than fat rails of white powder). "Welcome to Studio 54! Would you like to try my new Halston fragrance?" I said as I spritzed the waves of riders as they pulled in. I did not expect to have so much fun.

DON'T FORGET The Mildred Pierce Pie Social is Sunday, May 4, 2pm, at the Alamo Drafthouse on South Lamar.