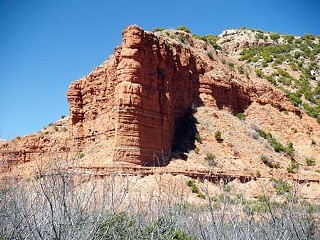 Caprock Canyons State Park, on the outskirts of Quitaque in the Texas Panhandle, spotlights some of the most vivid colors imaginable in nature. The dark greens of the mountain junipers stand out in stark contrast with the bright red sandstone walls.

If you have ever visited Palo Duro Canyon State Park, about 80 miles north of Caprock Canyon, then you know the magnificence of the escarpment between the High Plains and the lower rolling plains of Central Texas. Compared with its larger sister park, Caprock Canyons is beautiful, regardless of its size.

In the smaller park, the cliff walls, some as high as 1,000 feet, rise like natural palisades guarding the streams and trails. The narrow canyons make the rock walls seem more accessible and the colors more vibrant. The landscape is no less rugged than in the older park to the north.

The state Parks & Wildlife Department acquired the former ranch land from the estate of Theodore Geisler in 1975 and opened the park in 1982. At 15,313 acres, this is one of the largest parks in the state, and there is plenty to do within the boundaries.

For starters, the five-mile road from the new headquarters building to the farthest camping area seems to traverse universes as it slips through the canyons and into the valley of the Little Red River. The scenic overview at the midway point offers a mesmerizing view of the layered walls of the valley. It's difficult to imagine that such a small stream could cut such a deep gash into the landscape. It's easy to imagine a village of tepees along a wide bend of the river.

Evidence in the park suggests that humans resided here more than 10,000 years ago during the Folsom period. More recently, Apache and Comanche tribes camped in the protected canyons. At one time the colorful landscape was part of Charles Goodnight's legendary JA Ranch.

At the urging of his wife, Mary Ann, Goodnight preserved the seed stock for a herd of buffalo. Their descendants moved to the park to become the official Texas State Bison Herd. An overlook behind the headquarters, complete with spotting scopes, offers a view of the bisons' valley pasture.

The buffalo don't have access to Lake Theo, named for Geisler, but visitors are welcome to try their luck fishing for bass and catfish. A dip in the spring-fed water is a great way to cool off after hiking, mountain biking, or horseback riding on one of the park's trails.

About 25 miles of trails wind among the rock formations in the park; some of them climb to the top of cliffs, which have grand views of the canyons. The lower canyon trails follow the streambeds and are relatively easy. The more rugged trails are limited to hikers only.

In 1992, the park acquired the 64-mile railroad bed between South Plains and Estelline. Due to the lack of maintenance funds, only half of the trail is open to the public, but it is the most scenic portion. There are access points at Turkey, Quitaque, Monk's Crossing, and South Plains. Five camping areas along the route provide water and shade. Horses can be rented from Quitaque Riding Stables (806/455-1208) with reservations.

A flat, five-mile hike from FM 689 at Monk's Crossing, south of Quitaque, takes you to Clarity Tunnel. Built in 1928, it was the last functioning railroad tunnel in Texas. It is now home to a bat colony.

Caprock Canyons State Park is about 100 miles southeast of Amarillo. Off the beaten path, it only attracts about 75,000 visitors a year. This is a hidden gem of a state park that you won't forget once you've seen it. For information, call the park at 806/455-1492 or go to www.tpwd.state.tx.us.