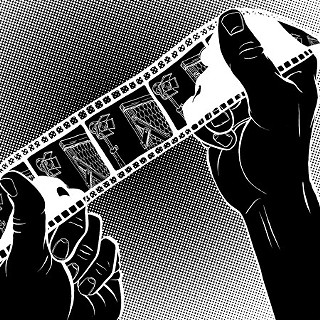 Some years ago in a city by the sea, where dreams turn to stone and lies are made beautiful, I interviewed the great, the near-great, and many a walking anomaly. We talked movies. How to direct, how to act, and what is a movie anyway? I've collected the best of these talks in a volume called Filmcraft (about which, see below). Much of the finest talk is too long for quotation – for instance: Peter Bogdanovich's master lesson on cutting, Peter Falk's fascinating approach to acting, Dennis Hopper on shooting on the cheap, Francis Ford Coppola's unintentional description of his own self-destruction, and Robert Altman's sly analysis of how he directs by intentionally confusing his actors. What follows are jewellike snippets.

John Huston: "You don't have to be the thing itself to be an actor in the theatre. You don't have to be the real article. This was Olivier. Olivier is not Richard III; Olivier is not Othello. These are not aspects of Olivier. These are the results of extraordinary observation, cunning, invention on Olivier's part, probably the superior of any screen actor's we know. But to be a screen actor, you have to be the real thing. The camera sees behind the eyes of the person, it sees something – it sees deeper into the person than just an acquaintance would. The camera has ... a discerning! If you're sufficiently interesting, why, the camera moves forward, and if you aren't – it pulls away from you. [You should have seen him spin the word "interesting" to mean very much, move forward on "forward," arch his eyebrows on "aren't," pause, then pull away – being the point as well as making it.] And this is I think one of the faults of the bad director – that he'll have you, the audience, up so close to an actor that it's embarrassing. It's familiarity that's uncalled for. Next thing you know you'll be in a questionable relationship!"

Jack Nicholson: "When I first started, my feeling about acting was that the actor was the most modern writer, the most modern literateur, in the sense that no matter what goes into a film, the product can only become objective through the actor's individuality. You're the person that's going to do this gesture. You can take a scene that says 'I love you' and turn it to 'I want to pick your peaches.' The actor is a writer in that sense. In the area of screenplays, the guy typed, and that was that, and he had his experience of writing, but that's not the product, that's the blueprint. So since most of what is literature today for most people actually comes through cinema, in that sense an actor is a modern writer, because he actually gets it on, objectifies it, and makes final what the concepts are.

"You know, a certain thing in every artist asks, 'Why am I doing this?' After all, there have been quite a few nice books written. Why am I writing another one? And in the era of the Beat Generation, the recommendation was to not. Don't further pollute the presses. If, in the Nietzschean sense, you had something that was going to actually be written in your blood, go right ahead. But other than that, get a job at McCall's. ... But those are just thoughts. I've always approached every job, every character, like I've never done one before. In fact, the anxiety you feel is usually those couple of days just before shooting, when you wonder, 'What is it that I actually do in my work?' And then, in the first 10 minutes that you start, it all comes – like riding a bicycle – it all comes rushing back to you."

Steven Spielberg: "The best thing I can possibly do [on the set] is communicate what my mind's eye sees. And that's not always easy. Because I usually have a very, very striking image of what I want to do. Whether it's a shot, or lighting, or the way the scene can be paced, or I'm shooting a very strange angle for a reason, there's always a method behind the madness. I think the toughest thing is actually communicating, so everybody who has to be my extension and do those things knows why, and knows how to get it. I mean, communication becomes everything. Directing is 80 percent communication and 20 percent know-how. Because if you can communicate to the people who know how to edit, know how to light, and know how to act – if you can communicate what you want so that what they're doing is giving you what you have up here [touches his temple], and what you feel, that's my definition of a good director."

Gena Rowlands, asked what advice she'd give to young actors: "I would say not to take anybody's advice, including mine. You should just try to find your own feeling about something, because that's the only thing that separates one actor from another: how she or he feels about character. Not to copy anyone or to hold anybody too high in your estimation that it might intimidate you. Just to think about [the role] until you know it's yours."

Vanessa Redgrave: "One important thing to understand and trust is that each script – because it does represent real life, even if it may be a very poor representation of real life or a very distorted representation of real life or bears little resemblance to real life at all – starts as real life, and, therefore, you can find a way to the real life from which it comes, if you let it develop its own life. And it does that automatically through the human beings who are chosen, usually all good actors. It [the script] starts to take its life through them and through the times they live in and what they knew. The unconscious begins to work. I'm stressing [the script's] own life because it does come from not just one other person's own life, or the producers who chipped in and changed this and changed that, or anybody else, but no matter who got involved – whether they did good work or damaged the thing irreparably – it still has a source of life that it comes from. And in the same way that if you're tuning a radio and you can't get straight on the correct wavelength, it's very distorted. But you search and search, and someone who technically knows how can tune in very fine to it and find the wavelength that the signal is traveling on, and he gets it very loud and clear."

Jeanne Moreau: "Yesterday we were waiting at a red light, and there were about 20 people waiting to cross. What attracted my attention was a man's hand stroking, gently, like this, a woman's back ... she was stretching and yawning, and he was just patting, like that. It was so lovely, you know. It lasted a few seconds. He was waiting to see the sign go 'Walk,' and he was just doing that [she makes a gentle stroking gesture]. It was beautiful. I haven't seen a moment like that in a movie in a long time."

Louis Malle: "My obsession has always been rhythm. I would ask the actors, 'Well, this take is great. Now I want to have it faster.' They look at me, 'But you said it was right.' I say, 'It's right, but once it will be edited, you never know. You could find out that what seems absolutely right when you see it as a separate piece in dailies and seems perfect, after 45 minutes of film it might be the moment when you get a little impatient or something, it's going to be too slow.' Because, you know, what is so difficult about filmmaking is that you're asked first to be, not a genius, but you're asked to be very talented, every day, for three months, from nine in the morning to six at night! Like going to the office and being at the peak of your talent from nine to seven. Which is absurd. There is no other art where you're asked to be a talented bureaucrat!"

Martin Sheen: "The first dialogue scene I did with Marlon [Brando, in Apocalypse Now] was in the cave there, when I came in and was thrust at his feet. Marlon looked at me and improvised a line that stayed in the picture. ... He said, 'Are you free of others' opinions of you? Are you free of your own opinion of yourself?' That's what he said to me." [This interviewer said, "Brando improvised that?!"] "Yeah. I looked at him, and I thought, 'God damn, I never thought of that.'"

Candy Clark: "When you're doing it, it's all three-dimensional, and you can look around the back of the set and it's all chicken wire, or the front end of the car is cut off and you have to use your imagination a lot. Or you look up, and you're in a three-sided room and the ceiling's out and there's just lamps up there, and one wall is just gone, and there's all these people out there. There's just so many people that go into this final thing where it's just you up there and your face. And then all you've got is this piece of film that you have to hold up to the light in order to see it. It's just this piece of plastic. That's all you have at the end and it's two-dimensional, not three-dimensional like it was when you did it. It comes out just flat, just this skinny piece of plastic."

To download Filmcraft, go to www.michaelventura.org, click on LA Weekly, then scroll down that menu to Filmcraft. There is no charge.