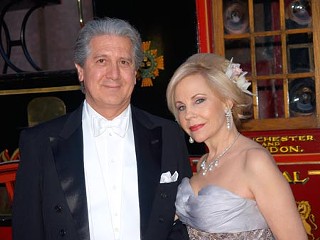 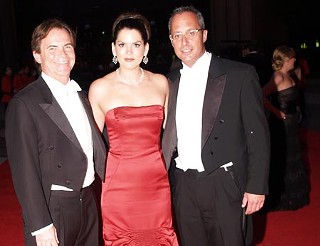 I lived a number of years in Houston over the course of my life but definitely not the Houston I've spent time in over the last few years. Friday, I entered the gaping maw of Houston High Society – a fascinating mix of nouveau and old-veau – to attend the Houston Grand Opera Imperial Ball. My friends Doug and Jennifer Bosch, owners of the swank Inn at Dos Brisas near Chappell Hill, Texas, had invited me to be at their table for the event, and I jumped at the chance. Of course, I'd be nothing without a photographer following me, so I arranged for my paparazzo, Seabrook, to accompany me. He was shacked up at the residences at the Four Seasons, which truly is the hub of transient luxury in Houston, but I stayed at my hosts' swank River Oaks spread. The dress code for the event was "International White Tie," which meant white tie, white vest, white shirt, black tailcoat, and trousers. But the addition of the word "international" meant that you could also wear the formal wear of your native country. Hmmm. What on earth to wear? Naturally, I couldn't abide some preset dress code, but did I have something grand enough for the occasion? I considered all the glittery Versaces, brocade vests, and formal jackets in my closet and wasn't pleased with any of the ensembles I tried. Then I remembered something I'd heard about people actually renting clothes for an evening. Rented clothes? Hmmm. How did I feel about that? Well, I do a lot of shopping for vintage on eBay, so could that be so different? Clearly not, since Al's Formal Wear on Guadalupe and 29th had great service and a kickass white duster coat and pants by Ecko, that I restyled into a dandyish riverboat gambler look by wearing black cowboy boots, a black silk shirt, a black jewel at my throat, a large white fan with black Chinese lettering on it, and all the jewelry I could carry. But the coup de grace of the outfit was the pair of Roberto Cavalli sunglasses that Jennifer gave me – huge, dark lenses adorned with jeweled black and silver snakes. They are the sunglasses to end all sunglasses, and suddenly, all doubts about my outfit melted away. Dear friend and former Austinite Mark Sullivan, who has just left Houston's Studio Communications and formed his own On the Mark Communications, was my escort for the evening (he did have the proper attire, of course). Along with our hosts and two other couples, we embarked on the limousine ride from hell. Upon entering the car, the driver was given specific instructions to enter the Wortham Center on the Texas Avenue side. But upon seeing the line of limos debarking Houston's royalty, the driver unilaterally made the decision to drop us at the back entrance to the Imperial Ball. Excuse me? Back entrance? Sorry, Rudy, but the point is to be in that line of limos. Rudy then compounded his error by trying to turn around on the Allen Parkway, which meant that we practically had to drive back to River Oaks. But we made our grand entrances at last, and grand they were, with trumpeters in knee breeches, a grand procession, and pretense galore. The lovely Dr. Carolyn Farb and her date were at our table – a primo position at the corner of the dance floor, and Mark was sitting next to me. Directly across the dance floor sat Mark's partner, Ceron (the hairdresser in Houston), with his escort, Diane Lokey Farb – the other Mrs. Farb. Ah, the complexities of polite society... Dinner was abysmal: They served potpie, and you could practically see the empty Swanson boxes stacked up in the kitchen. The entertainment was interesting and brief, and the afterparty was dreadful except for the desserts. We had a great time nonetheless; sometimes dire circumstances bring out the best in everyone. Not to mention the fact that Houstonians came out of the woodwork to find out who I was. My favorite moment was when the general manager of Saks Fifth Avenue in Houston sent an emissary to fetch me to their table and explain exactly who I was. I loved that, and they loved me. By the end of the night, I'd shaken so many hands, my paw began to swell up, but a late-night party that included the divine chef Robert del Grande of Cafe Annie and his incredible wife, Mimi, ended the evening sublimely. Sunday, we moved on to the Inn at Dos Brisas (www.dosbrisas.com), but we'll tell you about that another time.