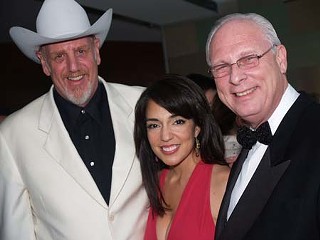 LONG, LONG TIME Really, all I can remember about the Long Center opening is the rocks. Big rocks: rubies, diamonds, emeralds, pearls – so dazzling I could hardly keep my composure. Teresa Lozano Long had the best and the biggest jewels: pear-shaped emeralds the size of pigeon eggs, ringed with diamonds and suspended along a diamond choker, with matching earrings, natch. I was so proud of all our social matrons for looting their vaults to pull out the really good stuff. What is the point in having the good stuff if you don't wear it? I saw a ruby and diamond parure (necklace, earrings, and bracelet) that looked like Cartier from the Duchess of Windsor's collection. The woman (whom I did not know) was wearing a white gown, and I just wanted to drop to my knees and worship at her feet. I know, I know – I'm sure I should be looking for something more spiritual in life, but, hell, when I see rocks like that, I'm just in heaven. And Karen Landa – omigod, in a tangerine silk Grecian dress with hair piled high and held in place with braids. She peed. And I mean that as a compliment. Every single aspect of the opening was flawless, from the army of valets to the costumed performers lining the grand entrance to the rivers of alcohol and mountains of food. But it was the performances in the Michael & Susan Dell Hall that were most electrifying. Of course, I was electrified to find that our assigned seats were in a divine private box overlooking the stage and the crowd. Needless to say, I felt like Eva Perón on the balcony of the Casa Rosada waving to my descamisados, but in all actuality, all I did was scan the crowd for friends and notables that I had missed during the crush of the party downstairs. Conductor Peter Bay and the Austin Symphony opened the show with the "Star-Spangled Banner," and I can tell you that I cannot remember the last time I heard that played live, but there I was with friends Kenneth Pipkins, Seabrook Jones, and Chris Arnold, all of us standing with our hands over our hearts, caught up in the emotion of the moment. I'm not an arts critic, just a fan, but watching Ballet Austin perform (you already know that I think BA's Stephen Mills is one of Austin's major assets) was enchanting. Pianist Anton Nel's solo performance on the Long Center's faaabulous grand piano proved not only how grand the piano was but how grand Anton Nel is. He's another of Austin's treasures. The Austin Lyric Opera, under the artistic direction of the charming and affable Richard Buckley, performed magnificently, and it was truly a jaw-dropping experience to see how many deeply talented performers Austin has; seeing them all on one stage in one night is something I'll never forget. But the finale, my dears, the finale was to die for. The opera chorus, the Conspirare Symphonic Choir, and the choir from Wesley United Methodist Church brought hundreds of singers to the stage, and they performed Leonard Bernstein's "Make Our Garden Grow." It was pure magic. Congratulations to Cliff Redd and his staff for pulling off this extravaganza. Thank you to Joe and Teresa Long for starting the funding for the process and to all the donors and supporters who have given Austin a world-class performance venue. But mainly, congratulations to Austin's citizens, since the Long Center now belongs to us. 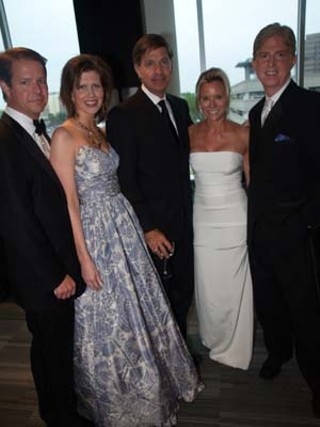 (L to r) Dean and Andrea McWilliams, Mayor Will Wynn, Wendy Poston, and Lance Avery Morgan at the gala to end all galas (photo by Seabrook Jones/juicythis.com)
More After a Fashion columns