Girlwonder Molly Steenson marvels that Web guru James Home can make a tripod out of pretty nearly anything! (Photo by Seabrook/juicythis.com) 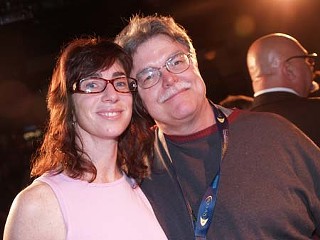 Heather Gold and Jon Lebkowski in the same room – PLUTOPIA! – best SXSW Interactive party to date. (Photo by Seabrook/juicythis.com)
INTERACTIVITY It may have been different in 1994 when SXSW Interactive debuted, but there's not a major tech player out there, like Google, Microsoft, and all the others, that doesn't have a major presence at the Conference now. Alongside of them are the other digerati – start-ups, creative agencies, software developers, futurists, designers, artists, media, and bloggers alike, all looking for the next big tech thing to happen. Compared to the other tech conferences, SXSW is more like the Golden Globes than the Oscars. The Oscars are reasonably predictable and safe while honoring their own, but at the Golden Globes, everyone drinks, has fun, and celebrates their accomplishments. Though it's called the "geek portion" of SXSW, according to event director Hugh Forrest, these geeks are making magic. The keynote address was given by Mark Zuckerberg, founder and CEO of Facebook, and former Disney head, Michael Eisner was interviewed. God, get me a cocktail and a tranquilizer. Granted, the presentations were not really designed for a deeply superficial social and style commentator like myself, but, hey, not everything revolves around fashion, obviously. Not that the rest of SXSW is much of a fashion show, but the participants in the Interactive portion win the I Dressed Myself in the Dark Award already. Speaking of awards, the Web Awards made a lot of people happy – including the winner in the high-school-age category, who walked up onstage and said very simply and touchingly, "Thank you. This is very exciting," and then exited to thunderous applause. Animoto Productions celebrated their Web Award win for their fun and innovative Make Your Own Music Video website. Check out www.animoto.com... What has 10 legs and drinks like a fish at the San José? Apparently it would be the members of SXSW Interactive perennial Adaptive Path, proving that SXSW is not so much a conference as an alibi...

Harlan Ellison (r) proved that cranky is the new black at the SXSW premiere of director Erik Nelson's Dreams With Sharp Teeth. (Photo by Seabrook/juicythis.com)

CHOP SHOP While you're enjoying SXSW, take some time to explore the 2nd Street District (Second Street, between Colorado and Lavaca, one block west of Congress) for great shopping, but for the real Austin shopping experience, head across the river to South Congress, aka SoCo, which is lined with enchanting shops, salons, markets, and restaurants.