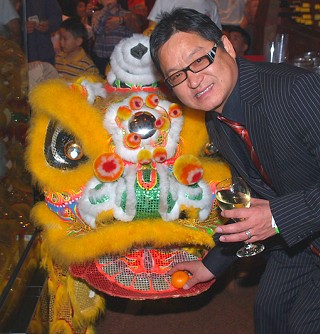 TEXAS FILM MEMORIES If I had to choose one event that has been my favorite to work on, it would be the Texas Film Hall of Fame. Though technically not part of the South by Southwest Festival, it does indeed launch the SXSW Film Conference with "more stars than there are in heaven," as another LB (not Louis Black) used to say. This year's show is No. 7, and I've worked on all of them, primarily choosing film clips to be used in the tributes, but also indulging in the celebrity suck-up for which I've become quite adept. Among my favorites was Farrah Fawcett – this tiny, birdlike creature, nervous and needy, who clung to my arm as if she were drowning. She chattered breathlessly to me, dragging me into her dressing room, where she gave me the seat of honor and knelt below me with her elbows on my knees. I was in awe of this woman – or maybe it was shock. She discussed anything I asked her about with candor and more than a few rueful, wicked asides. I practically had to disengage myself from her when it was time to move on to the next celeb, but she's remained a very fond memory for me, and I feel for her as she battles cancer. I remember standing backstage with Cyd Charisse as we watched the film tribute from the clips I'd selected. As one dancing scene segued into another, she seemed as entranced as the viewers and took my hand, whispering a grateful, "Thank you." Thank me? Making her look glorious was no challenge. Ever since I first laid my eyes on Carrie when I was a teenager, I've been smitten with Sissy Spacek. We honored her the first year, and though I overlooked the fact that she wore something akin to a black raincoat to accept her award, I was dazzled to be in her presence, and she squealed, "Omigod, what a great photograph!" when I asked her to sign an 8-by-10 of Carrie dripping in blood at the prom. My sister said that as the clips of Sissy I'd selected were being shown, I stood near the monitor with my hands clasped together, with a look of utter enchantment in my eyes, dazzled by the images on the silver screen. Dennis Quaid has been to TFHOF multiple times, as an honoree, presenter, and guest – one of the coolest and friendliest guys on the planet. You know he was easy to make look good in the film tribute. He's also a great host; I usually hang with him and his lovely wife, Kimberly, at some point during the Dennis Quaid Charity Weekend, as well (last year I published a photo of him mugging for the camera while wearing my D&G sunglasses). Robert Duvall is also an incredibly affable guy – a good talker and listener, who seems to be as interested in knowing about the person he's speaking to as they are to know about him. I have lots of TFHOF stories, and I'll bet that this year I'll be able to regale you with lots more.

TFHOF 2008 This year, Debra Winger's coming – damn, I love her. She will accept the Tiffany & Co. Star of Texas Award on behalf of the cast and crew of her breakthrough film, Urban Cowboy. She landed her fairy-tale prince in An Officer and a Gentleman and broke our hearts with Terms of Endearment. She did Black Widow with Theresa Russell, an underrated thriller that I'm happy to watch periodically. Though her film successes have been spotty over the last few years, she is undoubtedly one of our greatest actresses. The late Jayne Mansfield, noted more for comedic and other assets rather than her acting, is a film legend nonetheless and will be honored, with the award being received by her daughter Mariska Hargitay (pronounce it correctly, boys and girls: It's mar-ISH-ka). Selecting her clips was definitely a challenge; there are so many incandescent moments, and I tried to show her total range, from her first film appearance (in which one critic described her as "sex on a stick"), through her heyday to her final film, in which she acts her heart out, playing three different characters. I will always remember seeing former gossip queen Rona Barrett on Dateline: Hollywood in June 1967, as she announced that, "The lovely and talented Jayne Mansfield is dead, killed in a car accident on a rain-slicked Louisiana highway." I almost fainted. I was 9. TFHOF 2008 is also honoring Mike Judge and Thomas Haden Church and will be emceed by Dan Rather. But the late breaking news? We're honoring – omigod, I can hardly write it! Morgan fucking Fairchild. I. Love. Morgan. Fairchild. The Initiation of Sarah. Paper Dolls. Flamingo Road. Falcon Crest. I'm totally her slave. To see all of this and more, tables for the event are still available at www.austinfilm.org.