A short history of grain elevators in Texas 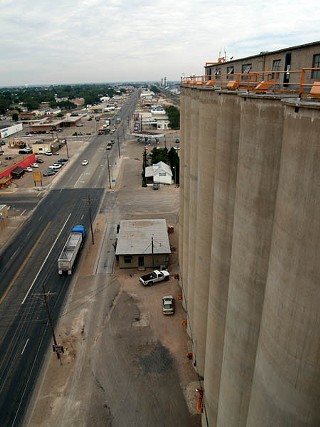 A short history of grain elevators in Texas. These roadside towers are monuments to the bountiful harvest of America's fields. You know it's time to ease off the accelerator when the grain elevators along the highway begin to look like a picket fence.

James Turnbow with I.P.S. Seeds gave me a tour of the soybean elevator in Muleshoe. Whether they hold corn, milo, soybeans, or sunflower seeds, all grain elevators are basically big storage tanks. From that common trait they can expand out in size and amenities. For instance, the elevator across the street from Main Street in Muleshoe has blowers at the top and bottom that dry the beans before they go across the railroad tracks to one of the largest soybean processing plants in the U.S.

Soybeans arrive at the plant about 60 miles northwest of Lubbock by railroad car from around the world, not just from Texas fields. Five of the six elevators in Muleshoe feed the machines that turn the protein into a white curd that is then added to hundreds of other products.

I.P.S.'s biggest storage facility in town is made up of 18 concrete tanks in two rows, each 15 feet in diameter and 110 feet tall. Figure on average about 250 bushels in each foot of tower or about 27,500 bushels of soybeans that look like good-sized peas except they are an off-white color. Each tank holds the cargo of about seven railroad cars or 28 big trucks.

Concrete silos are better than wood or metal bins because the thick walls insulate the grain from extreme weather, Turnbow says. This is important on the High Plains, where temperatures can fluctuate 30 degrees in less than 24 hours. "You can leave the grain in a concrete silo for a year, and it will look as good as when you put it in," he says.

The storage buildings get their name from the conveyor belt, bucket, or auger elevators that lift the grain to the top to fill the silo. Then gravity is used to empty the tank. When filling the tanks, the service areas are shrouded in a cloud of dust that leaves a chalky film on everything. It takes only two men to unload a boxcar or truck trailer in a matter of minutes.

While they are waiting to be sold or processed, grains are stored in the elevators for use on-site for such things as seed or livestock feed. Some elevators are used only at harvest time, while others are constantly being filled and emptied as the commodities move through the market.

It is the job of the Texas Depart-ment of Agriculture to keep an eye on the business of storing grains. "We are to elevators what the FDIC is to banks," says Rick Garza, coordinator for the commodity programs at TDA, "except we're dealing with grain instead of money." He oversees 217 licensed operators with about 500 elevators around the state. The federal government regulates about 500 other grain elevators, including all rice and peanut storage facilities. No one seems to know how many abandoned elevators dot the highways in Texas.

The number of operating grain elevators peaked around 1984, says Ben Boerner, president of the Texas Grain & Feed Association in Fort Worth. Since then, the organization's membership has dropped from 1,500 members to fewer than 500. "The small-town, family-owned elevators are going the way of the independent grocers," Boerner says. "The kids aren't interested in continuing the business, so they're either selling out or shutting the doors."

Many of the concrete cathedrals of the plains were built after World War II to store government-owned grain. The feds used the national stockpile to help reduce the volatility of prices for the farmers. After the 1985 farm bill, the government began divesting itself of huge holdings of grains. Today, ethanol is fueling the market and filling the silos.

It was the evolution of transportation that inspired the first grain elevator in 1842 in Buffalo, N.Y., as a way to load cargo ships. It wasn't until the 1890s that the first grain elevator in Texas was built at the Port of Galveston. In 1928, Burrus Mills built a concrete elevator almost a mile long with 123 silos in Lubbock. The ports of Corpus Christi, Brownsville, and Houston have the largest elevator capacities in the state.

Texas farmers had a record harvest in 2007, and grain elevators around the state are bursting at the seams. "It was the best in 50 years for South Texas, and some say the best harvest ever for the Panhandle," TDA's Garza says. "It's about time the farmers caught a break."