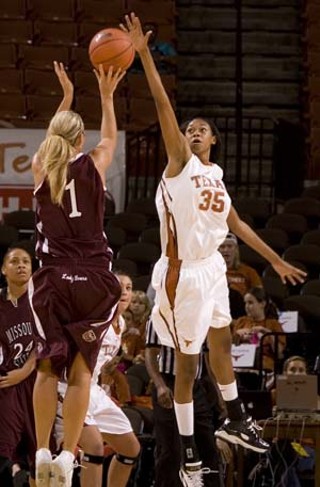 I hope that it's not sexist of me to say that Ashley Lindsey, starting center on the University of Texas women's basketball team, is freakin' adorable. Because she is.

True, I'd never use that word to describe Damion James, say, or Connor Atchley of the UT men's team. Then again, I'm betting that neither of those guys makes a special trip to Wal-Mart each week to buy a new pair of Tinker Bell socks.

Lindsey does. Although she does her best to duck out of interviews, the socks are the first thing she mentions if you get her talking.

If Lindsey can be bashful in interviews, at times she can also be a bit abashed on the court, trying to hide the fact that she's a lanky 6-feet-4-inches with a 6-foot-8-inch wingspan. "Her first two years, she was probably the tallest player in the league, but she played like the shortest," said Bailey. "That's changed. She's playing a lot bigger."

But not as big as coach Gail Goestenkors would like. Consider Lindsey's first half against Oklahoma last Sunday. Going up against two of the most formidable female basketball players in the country – the Paris twins, Ashley and Courtney – Lindsey looked like a terrified ninth-grader on her first day of high school, just hoping nobody would notice her. No points, no steals, no blocked shots. Just one happenstance rebound.

Whatever coach G said at the half, it worked. Suddenly, the graduate of Connally High was a huge presence – blocking shots, forcing turnovers, going strong to the hoop, scoring 12 quick points and bringing the Longhorns back from a nine-point deficit.

Unfortunately, that would be it for Lindsey and the Longhorns that afternoon. Goestenkors gave Lindsey a short rest – and Oklahoma took advantage, going on a 19-point run to win the game 74–58.

"The expectations are growing for her," Goestenkors said. "She's like a player who doesn't have confidence in her shot. Before, she wanted to be out there, but she didn't want to be noticed. She's learning that it's not just okay to be strong, to be aggressive – it's something to be proud of."

And maybe it's that, and not the socks, that makes Lindsey so damn adorable. We think of major college athletes as these fully-formed entities. We forget they're just kids still in that awkward stage of adolescence, still getting to know themselves.

"I just don't like being in the spotlight," Lindsey told me a few weeks ago.

"But you are in the spotlight," I said.

At that, she gave a kind of embarrassed smirk, all but admitting that, okay, maybe the attention wasn't all that bad. "I'm getting used to it."