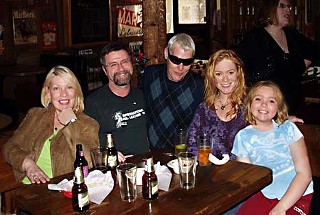 The gathering of the clan: the Raul's reunion 2008, with (l-r) Margaret Moser, photographer and former husband Ken Hoge, Your Style Avatar, Dayna Louise Blackwell and daughter Madeline Claire Blackwell-Howes (who was not around in the Raul's days but is family nonetheless), and E.A. Srere in the background.

TRUE CONFESSIONS The end must be near – I attended a ... um, how can I find the right words? A Super Bowl party. I know, I know – it boggles the imagination. The real drama was about what to wear for such an event – some Joey Buttafuoco pants and a torn sweatshirt? A trampy cheerleader's outfit? Or maybe just some paint on my face and torso? Pretty. Ultimately, I opted for black cashmere and lots of jewelry. Quelle surprise. I attended with my friends Mark Erwin and Stephen Rice. Someone asked me whether I was for the Patriots or the Giants. "Oh," I replied, "is that who's playing?" Not knowing anything about either team, I randomly selected the Giants – not because they're from New York but because I like the team's name, and I'm attracted to really tall people. Our host, Clayton Williams, had a packed house, but our interest in watching the game extended as far as the cocktail bar, and we proceeded to hold court on the patio all night, while our chitchat was interrupted by occasional cheers and moans from the football revelers. The ones inside, I mean. We were well in our cups by the time an uproarious wave of male voices (okay, there was some shrieking, too) rolled out the back door and led us to the conclusion that someone had done something fabulous, and soon the game was over, apparently. Later, we celebrated the victory at Taco Cabana with 4,000 of our closest friends, all of whom seemed pleased that all those tall people won that game. I didn't even know what inning it was until it was over.

WHINING AND DINING If it wasn't the grandest meal I've ever had – it certainly was the longest meal I've ever had. It was Project Transitions' wonderful Guess Who's Coming to Dinner event, and this year I went to the Latin America Meets the Lone Star State party given by the Spice Boys, aka Michael Barnes and Kip Keller, Nick Shumway and Robert Mayott, Dale Rice and Antonio LaPastina. The 11-course meal began at 7pm, and we were finishing up the last morsels at 1:30am – long after the official dessert and cocktail party that we were supposed to attend afterward had ended. But I hardly noticed the time fly by as our hosts and other guests traded tables between every few courses, while working our way from the gorgeous patio all the way through the formal dining room and being seated with a different dinner partner at each stop. Having attended this event several times before, I can truly say that this is one of the most creative and fun fundraisers ever. Among the 20 other dinner parties for the event that night was the notable I'll Have What She's Having dinner at Karen and Rick Hawkins' to-die-for home – the menu consisting of food with aphrodisiac qualities. OK, we'll definitely whine and finagle until we get invited to that party next year – but it would be hard to top the parties this year. Good work, PT, and thanks to my hosts.

VALENTINE'S DAZE For Valentine's shopping, Second Street's Eliza Page invites you to view the new collections by local jewelry designers Andrea Moore of Gypsy Born Designs and Rachel Roberts of Mingle, Thursday, Feb. 7, 6-9pm. The trunk show runs through Feb. 10, but on Thursday you get cocktails and the best selection... And go to www.lakeaustin.com to see what Valentine's treats Lake Austin Spa Resort has in store for you and your loved one. Multiple packages include scrubs, massages, lunch, and even overnight packages for a truly romantic retreat... Speaking of retreats, Doug and Jennifer Bosch's Inn at Dos Brisas resort (www.dosbrisas.com) in Brenham has just been awarded Mobil's Five Star classification, shortly after being awarded membership in Relais & Châteaux, an honor bestowed upon the most luxurious hotels and gourmet restaurants. Texans do like their luxury.