Your Style Avatar remains new-year-fabulous in fur despite others' mauling, pushing, and vomiting 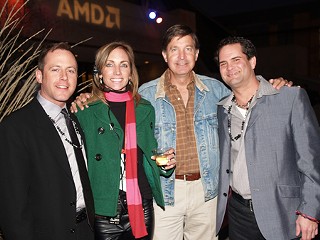 PARTY POOP I must have had a fabulous last couple of weeks – if only I could remember enough to tell you. The Christmas parties were sparkling and lovely (like Zach director Dave Steakley's party was and Jody Scheske's and Marvin and Eva Womack's), the nightclubs were swingin', and the streets were full of merrymakers. Too much goddamn fun, if you ask me. And far too many new and different outfits to come up with night after night, which was no fun at all. OK, maybe just a little fun. One distant memory involves my sister, Margaret, and I attending the party thrown by everyone's favorite Go-Go, Kathy Valentine. On the way there, while recalling the early-Eighties heyday of the Go-Go's, Margaret mentioned that she thought she remembered the Go-Go's back in the day doing an anti-fur ad for People for the Ethical Treatment of Animals. I pulled my new black fur coat around me snugly, trying to avoid the chill – not the chill outside that the coat protected me from but the chill that might greet me as I entered a possibly anti-fur activist's home wearing fur. But if indeed Mme. Valentine had an issue with my coat, she was the perfect hostess and did not mention it (or hurl paint on me or slice the coat to ribbons while I was wearing it). I told her how I'd gotten the coat on eBay – a vintage fur once worn to the 1981 MTV debut party by original MTV veejay, the late J.J. Jackson, who was pictured in the eBay listing with the coat thrown over his shoulders. Kathy looked me up and down like a searchlight and said, "I remember him in that coat – I was at the MTV debut party in 1981." It was a jolt of reality that took me back all those years, when the Go-Go's ruled the earth. I remembered with horror what I looked like back then ... but the talented Mme. Valentine looked just as fresh and dewy as ever.

NYE When I heard that my friend Patricia Paredes was the PR person and interim executive director of First Night, I besieged her with calls, text messages, e-mails, flowers, and gifts, begging her to put my guests and me on the list for the mayor's private balcony party at City Hall ("Please, Patricia, I'll die if we don't go," and even, "Patricia, I saw this lovely diamond bracelet at Neiman Marcus, and I knew it would be gorgeous on you"). She finally relented, and we were in. Now, I have to admit that I loathe New Year's Eve and Halloween. Total amateur nights with drunken strangers on the street mauling me, pushing, vomiting – and so I just don't go out on those nights. In fact, I've never been out on NYE in Austin, at least since I was a teenager. But this year I braved it – and loved it – at least from my perch on the third-floor balcony of City Hall, where we saw it all. It was hard to guess how many people were on the South First Street Bridge. From where we were, everything below looked so small, and suddenly I felt like Joan Collins in her 1977 tour de force Empire of the Ants. Among the things we could see was the electrifying performance by DrumJam (watch their NYE performance on YouTube at www.youtube.com/watch?v=LNSmYcfDxJw): Both sophisticated and raw at the same time, they are the ultimate showmen. We left for a while to make the rounds of other clubs and parties – Pangaea is truly luxe, and the service from doorman J.P. and owner Michael Ault and his beautiful wife was excellent. But we'd never seen any of the patrons before – they all seemed to have flown in from holidays in Cancún. After several very serious cocktails (and what could be more serious than cocktails?), we returned to the mayor's party, at which Patricia asked me to help her do the New Year's countdown, along with Attorney General Greg Abbott and Statesman Entertainment Editor Michael Barnes. As soon as the countdown was done, we flew up to the third-level balcony and watched the fireworks – a truly awesome sight seemingly three feet away from us at eye level. Spectacular. Retiring to Oilcan Harry's Black and Silver Ball to end the night, I too wound up like those other amateurs – mauling, pushing, and vomiting. OK, I didn't actually vomit. I just felt like it after seeing some drunk chick spew all over her sequined party dress. Happy 2008.