Stephen's calling the kettle black again. OK, these are some pretty black kettles.

Readers agree that holiday decorations on Sixth Street are preferable to those on Congress. (Photo by Seabrook/juicythis.com)

'VANITY FAIR' ENOUGH I was transfixed by an article on www.vanityfair.com about the potentate of porn, Larry Flynt. I've always sort of admired Flynt's zeal for catching so-called "family-values" politicians with their pants down (hello, David Vitter!). On the other hand, I think Flynt is just as despicable as those he goes after – Rudy Giuliani, for instance. Flynt has both barrels aimed at "the Rude," questioning whether the former NYC mayor is a homosexual, due to the fact that when the Rude split from ex-wife Donna Hanover, he moved in with a trusted friend and supporter, who happens to be gay and has a live-in lover. Flynt is practically apoplectic over the issue, spewing forth all kinds of bile to prove his point. Please. Giuliani is not gay – you can tell by his hair. Says Flynt, "Why do you break up with your wife and move in with gay guys?" Perhaps he should pose that question to Jim McGreevy – or better yet, Paul McCartney, whose harpy of an ex-wife is so frightening that she could drive any man into the arms of another man. Flynt continues: "I don't hate gays. But I don't want to live in an apartment full of them. They'll bitch and cry and all." Evidence, please? Is Flynt's opinion based on personal experience? "I don't know whether he's gay or not, but I'm saying, if you got four friends, all gay, living in the same apartment, how are you going to know which one's gay? I'm surprised no one's even asking that question." I'm surprised at the stupidity of the question. Four friends, all gay, living in one apartment, and you can't tell which one is gay, Larry? To me, this brings up the new breed of hetero-flexibles out there: The ostensibly straight guys who seem to date women exclusively but have zero compunction about dropping trow for the right guy. It is a phenomenon that will soon have an enormous impact on sexual politics in America. Sort of like Larry Flynt has. But these changes will occur without the "help" of a ridiculous figure in a solid-gold wheelchair. 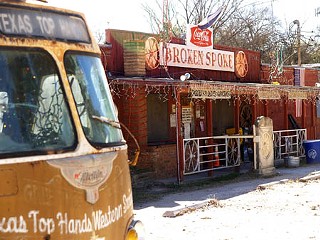 "We ain't changin' nothin'," said Broken Spoke owner James White, who is hanging onto his 1 acre in the midst of 8 acres of development being planned around him. (Photo by Seabrook/juicythis.com)

SHOCKED. SHOCKED, I TELL YOU I'm shocked and surprised to hear that the parenting book written by Lynne Spears (Brit-Brit's mom) has been yanked by the Christian press that was planning on publishing it, after the disclosure that the other Spears daughter, Nickelodeon star Jamie-Lynn, is 13 weeks pregnant at the age of 16. And Jamie-Lynn has been roundly acclaimed as the "good" one. Though it seems like a thousand years ago, it's easy to recall all the PR bullshit about Britney remaining a virgin until she got married. Yeah, right, Brit. In no time flat, it seems like she went from being a slutty-looking Little Mary Sunshine to ... well ... just a slut. And now Jamie-Lynn seems to be following Brit's example. Does this mean that Jamie-Lynn will pose naked while pregnant? Or better yet, will we get to see paparazzi photos of her clean-shaven lady parts? Really though, the question is: Who the hell thought Lynne Spears was a good enough parent to write a book on it? With a few simple changes, the book could easily be about bad parenting. Frankly, I think there could be a number of excellent books on bad parenting. Imagine Susan Smith's Guide to Good Parenting, which might offer such tidbits as, "If things get tense at home, just load the kids into the car and take a ride to a nearby lake for an afternoon of 'swimming.'" Or Dina Lohan's book on parenting? Dina (called White Oprah by those in the know) could write How to Ride Your Daughter's Coattails Into Notoriety, offering advice such as: "Pretend you're the same age your daughter is. Dress like her, party with her, be her." And then there could have been Patsy Ramsey's Guide to Good Discipline.